I think the button issues are corrected now. Try it (code on the sidebar) and let me know if it doesn't link properly for you. 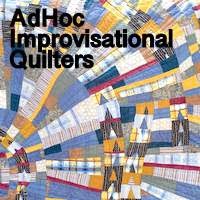 Julie's already written a post about her Improvisational journey. Check that out you're there.

A Group Blog for Improvisational and Utility Quilting

Kaja and I started a group blog for improvisational and utility quilters. We believe it will generate more interest and encourage more participation than a linky party because every contributor will be able to write as and when they choose.


Check out our inaugural post at AdHocImprovQuilters(dot)blogspot(dot)com. When you have something to contribute let us know and we'll gladly add you.

Kaja and I plan to post there on Fourth Tuesdays... and any other day we have something improvisational or utilitarian to share.

Patty asked how to add the button to her blog. Here are directions if you use Blogger:

Rooted, Revived, Reinvented is the current exhibit at the Houston Center for Contemporary Craft. I finally had time to view it. The first area highlighted  historic and indigenous examples such as this 19th c. Treasure basket, possibly Yokuts. They were a tribe in the San Joaquin valley and Sierra Nevada foothills - near my favorite parts of California.


Most of the exhibit concentrated on reinvented basketry. I was taken by these small Mixing Bowls by Karryl Sisson (2003) which were coiled with polymer and vintage cloth tape measures. I'd like some in my sewing room.


Then this amazing basket recalled the Feather one above. The sharp porcupine quills in the top are reprised with black ash and pine needles in the jar.


From a distance this menagerie appeared to be cut from iron sheeting.


But closer inspection reveals the scene is entirely composed of coiled linen and wire.


At the end a display of "Touch Me" basketry techniques and materials encouraged comparing the tactile impression of various techniques such as weaving, plaiting, coiling, stapling, netting, twining and lashing. How would these translate in quilting?

I hope your weekend is as much fun.

I'm constantly amazed how quickly small quilts get finished. It took part of one day to sew the borders on and pin baste the quilt, another day to quilt it, and it was bound the next morning. Then it just needed a quick wash and dry to be ready to gift.

I like to wrap these quilts into little sausages and tie them with a pretty bow. The colors are pretty enough for wrapping paper and I get to see their excitement when it's unrolled. How do you wrap quilt gifts?


Scanning my stash brought this yellow and green stripe to the surface.


Red was my original plan for the binding with grey quilting thread but I like this even better, especially since the backing is red with "sun-printed" ferns.


I sewed the binding to the back then pressed it away from the back and again to turn it over the raw edge. That means only the corners need to be pinned although I use a stiletto to keep things straight.

This baby quilt going to its Forever Home tomorrow. Hooray!

After manipulating the corners of the inner border, I decided on this spinning effect. It requires a  partial seam but that's easy enough especially on such long strips. It just blends with the spinning pinwheels. {The other choice was a courthouse steps arrangement. I forgot to snap a photo and I'm not going back. This woman is on a deadline.}


DH and I flew to Chicago last weekend for baseball. We'd had the trip planned since last year and he encouraged me to take a break. I could have taken a photo of the entire Wrigley's sign but loved that the Cubs flew state, city, and team flags for their opponents.  We arrived early the first day for a stadium tour. Wrigley Field is the second oldest baseball stadium. Their rich history combines well with some recent updates.

The next day we toured the Chicago Institute of Art. Silly me. I thought it was mainly a school but they have an enormous collection of art: paintings, sculptures, textiles, artifacts. Having learned from previous experience we selected five galleries to tour thoroughly and left the rest for another visit.

I never realized Seurat's painting was so large. And there was always a crowd in front of it.


The painted border is an interesting detail I never knew existed. This is not a mat. It's painted on the edge of the canvas. So quilters aren't the only ones who add borders.


I thought this was a "one-off" paint technique until I saw Vincent van Gogh's Fishing in Spring, the Pont de Clichy (Asnieres) nearby.  Influenced by Paul Signac and Georges Seurat, the Neo-Impressionist style emphasizes scientific use of color theory. You can see many aspects of Seurat's technique in this painting including the bright red mat Vincent painted around his picture.


Chicagoans rallied to preserve their city's landmarks and the Chicago Architecture Foundation leads river tours of the varied skyscrapers of downtown. We thoroughly enjoyed ending the day with a sunset cruise while watching the lights go on. So informative, so lovely.


When buildings are torn down, artifacts are offered to various foundations and museums. The Institute displayed several in their Grand Staircase. Don't you love the Art Deco elevator screen?


Now that we're home I can finish the Scientific Pinwheel quilt. Good thing because the new dad visits soon.