Beginnings could happen more than once, or in different ways. You could think you were starting something afresh, when actually what you were doing was carrying on as before.
~Rachel Joyce

Since this is the third baby quilt with a four letter word, it must mean a new series has begun. The Coins will make words suitable for babies... even if they are  FLWs {four-letter-words.} I wrote down several then used an online Scrabble dictionary to find others. {There were amazingly few appropriate ones in the that dictionary.} Now ideas come day and night.
My DIL highlighted the ones she thought her friends would prefer and I've {sort of} prioritized them. Of course sometimes a word will pop to the top of the list depending on who the quilt is for.
This is HOPE as a top...
and again when it's finished.
The border is supposed to make it a bit larger and set off the words better. Not sure if this version succeeds with the second task. With solids running low, two were combined to frame the center. {It does look better in person.}
The quilting is a spiral.... again. I enjoy this {now} easy design although sewing and watching the circling sometimes makes me dizzy.  I'm also using up all the thread that's been hanging around for years. There's no selvedge on thread so no way to know how old they are. This time I used two partial spools of pink.
The back contains a reef print. Is is sea fern? I'm not sure, but the colors are quiet and the fabric was on sale. To make it wide enough I inserted an ombre remnant from my sister and, since that remnant wasn't wide enough either, I added a small scrap of pink in the center.
The background solids each use about a fat quarter. I purchased them for this quilt since there is none in my stash {Hallelujah!}  It's obvious I'm out of those soft pastels of the previous two quilts because the prints are mid-range values. Some more fabric, both solid and printed, will be required soon if I keep up this series. I see shopping in my future.
As soon as the last thread was buried and the quilt washed and dried, it was off to my DIL's house for a friend of theirs.
Quilt Specifics
Size: 45" x 45"
Design: String quilt
Batting: Hobbs Heirloom Premium Natural Cotton
Thread: Aurifil and Metler cotton thread in pink
Quilting: Spiral with walking foot
Approximate yardage: 5.5 yds
Reading 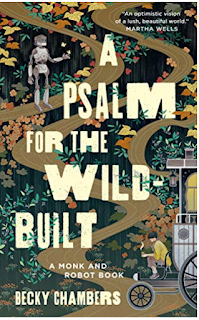 Stories like Becky Chambers' are creating a new genre - Hopepunk {like Steampunk.} Her first was intriguing and engaging; each subsequent novel has been better as her talents strengthen. Although most consider her a science fiction author, A Psalm for the Wild-Built has no aliens, weapons, or space travel at all. Instead, Becky's populated a world with humans who realize they are destroying it. As their robots gain sentience, they {the robots} put down their tools and head into the wilderness never to be seen again. Two hundred years later a tea monk encounters a robot who asks him, "What do people need?"
This is an insightful and thoughtful book as the two characters begin to learn from the other. Hopefully it is the start of a long series, too.
Enjoy the day, Ann
Posted by Ann at November 09, 2021

Another really cute baby quilt! I got word from my sister that her daughter wants a baby quilt for a woman she works with. Haley had a specific idea of what fabric she wanted so I broke down and bought some. I even paid full price! Ouch!

Lovely, Ann. What about joy with a star for the 4th space?

what a great idea... I admit it was hard for me to see the word in the photo til you told us what it was, probably much easier in person. Thank you for all the ideas you give freely, and the book list!

Yikes. I have a love/ hate relationship when I’m given too many specifics about a quilt. But good for you!

That sounds interesting. Thanks.

This one was hard to read once the border was added. I’m trying to decide exactly why. But they are fun and I think the word will pop out/up sometime and be a nice surprise.

Ann I'm loving seeing your word baby quilts, do make more for us to enjoy. I think the solid fabric corners are so effective and most definitely set off the words. I see what you say about the difficulty of reading the words with the addition of the border but it's still a beauty!

Another delightful quilt! Sometimes, I think it's interesting that the block/word isn't instantly obvious, it makes one explore a little more!

Thanks, Maureen. A series gives me time to figure out these issues. And babies enjoy them whatever they look like.

Thank you, Linda. I do like the idea of the words hiding a bit.

I believe the positive energy in these words will wrap around the child. I have added words when quilting, like dance, dream, and power, to do the same.

That’s a lovely thought, Lisa. Smart of you to quilt them into your gifts. Thanks for writing.

Your rainbow strip letters are so striking!

Thanks, Nann. I'm learning more as this series progresses.