"The world will still be imperfect, because men are imperfect.
Good men will still be killed by bad, or sometimes by other good men,
and there will still be pain and disease and famine, anger and hate.
But if you work and care and are watchful, then in the long run
the worse will never, ever, triumph over the better.
And the gifts put into some men...
shall light the dark corners of life for all the rest, in so brave a world."
~Susan Cooper in The Silver on the Trees

Welcome to the first month of the String Tulip QAL.
At AHIQ we issue biannual prompts to focus our creativity and our discussions {somewhat.} However, this time we are trying a QAL. Using my String Tulips as a starting point, I'll post directions here and on AHIQ the first Tuesday of the month.
We have the whole month for each step which helps it fit in between the many projects we all have. You can try it or not. Change it up to suit yourself - larger blocks, different flowers, flowers in the border. Whatever. That's why it's improv.
This month we address the string blocks, the ones in my border, because that was the first part I made.
Block Plan
There's no way to figure every size and variation of these blocks. I'm writing what I did previously. Make your own alterations. My 42-inch square baby quilts used five-inch finished string blocks. The X shows up when you put four blocks together. Even if you make a different size quilt, keep that fact in mind.
As I wrote last month, you will need 64 string blocks to make only Electric Socket Shock {a quilt of all string blocks} or 48 string blocks to make the String Tulips quilt variation but it always helps to have some extras.
Cut paper foundations 5.5" square. Use newsprint or even copy paper and cut with paper scissors or an old rotary blade since the paper will ruin it for fabric. Here's a sample Electric Socket Shock block to scale with a 1" marker to check. It looks like the sketch below. 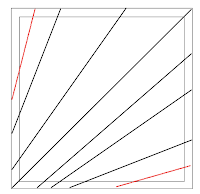 1. Use a larger wedge or chunk instead.

Don't worry about it being too large. It's easy to square up later... even if there's some waste.

2. Adjust your final trim to avoid the problem.

Here, the paper peaks out a smidge behind the final strip on the right.

Turn the block over to evaluate if it can be eliminated by trimming a bit differently. In this case, moving the 5.5" ruler to the right and down for the final squaring up resolves the problem.
This solution does not work for precision piecing; however, these are improv blocks and seam lines don't need to match up.

3. Move the final strip closer to the center

If the last open space on the foundation is too small {less than 1.5" wide} consider moving the final strip towards the center and sewing a new quarter-inch seam allowance based on the top strip.
Final Details
Press after every pair of strings is sewn {one on each side of the first.} If the foundation is heavier paper I steam the back {paper side} each time, too, to weaken the paper for tearing later.
Blocks can be trimmed to any size, larger or smaller than the foundation, as long as the fabric extends that far. Trim from the front or back of the block, whichever wiggles less. The paper does not adhere as well to the mat or the ruler so take your time and be careful. Mine get  trimmed as soon as they are finished; however, because of all the bias edges, I don't remove the paper until I'm ready to sew them into the top. I just keep them in a stack where they won't fray or stretch.
Special thanks to Gayle, Sharon, and Maureen for proofing and testing this post. Their suggestions improved the clarity. For more information, Maureen kindly agreed to post her impressions and samples on her blog, MysticQuilter.
Please post photos on the AHIQ blog if you can. Feel free to post your progress anywhere - on whatever social media you use and your own blog but we'd appreciate tagging it with #AHIQStringTulipQAL so they can easily be found. We always enjoy details about how you personalized your version. The process is more interesting to us makers.
String Theory at the Iowa Quilt Museum
The online gallery tour is available for $6. It's set for a single viewing so get your coffee ready and use your largest screen. I feel very fortunate it's available for us at home.
Enjoy the day, Ann
Posted by Ann at February 02, 2021

I am going to try making 4 blocks and see what my string bag contains colorwise...I just love this quilt of yours.. [and I have often have made Ojos Di Dios blocks--accent on the triangle corners in these] .
thanks for the wonderful tutorial in both pictures AND words...really great Hugs julierose

great idea and it should inspire so many to sew! Thanks Ann

It's going to be difficult to come up with something that looks as sharp as your quilt, but I'm definitely willing to give it a go.:) Thanks for the tips and tricks!

Your work and your fabrics are beautiful, Julie. Thanks for the compliment.

I love your work, Audrey. You will go somewhere wonderful with this basic idea... which kind of came from you. Thanks for inspiring me to make tulips. I needed that push.

I'm look forward to this a lot! Your instructions are very detailed and I can already see how to avoid a couple of my most common slip ups.

Loved your quilt when it appeared on your blog ( which I follow with interest). All the bright colours are great and work so well together. I’m definitely tempted to try this quilt design. I’ve made loads of String blocks and quilts in the past but not one that has those wedges coming together to make an X. Brilliant idea! Thank you for all the time and trouble you have taken to write such comprehensive clear instructions.❤️

I'm thinking hard about this one and I think I'm in. It's the tulips that are drawing me! I think your directions will help too. I haven't foundation pieced much but I never thought about trimming the seam on string blocks so that will help!

Isn't it good to see that there a quite a few quilters interested in joining in. I shall be busy tomorrow with more blocks haven't yet decided whether to keep to the size you made Ann or go a little bigger.

You are very kind, Kaja. I've struggled with the instructions. Are the too detailed or too brief? I hope they work without drowning people in detail.

How complimentary to let me know you follow my blog with interest, Linda. I've made loads of string blocks, too, but wondering if there was a different way to put them together led to this. I hope the instructions are clear without being too long.

Thank you, Cathy. It took a couple of months to write and rewrite the directions. Having others test them was the biggest help. I hope you make some.

Tulips are always a treat, Sue. I hope you are able to join and am glad you found helpful hints in the directions.

I think it's largely thanks to you, Maureen. What a help you were to test the instructions and make your beautiful set. Isn't it great to find ways to use the leftovers sitting around our homes?