I'm still working on the sawtooth quilt. As I wrote in my last post, the original thought was to alternate strips of triangles with a tan or beige sash. Part of the inspiration came from Serenity Now by Lara. Isn't this a calm, sophisticated quilt?  (Of course, she has diamonds that point lengthwise and no sashing.)

But then...
Sujata posted a photo on Facebook of a vintage Ghanaian textile, asking if it inspired anyone to make a quilt. Of course I loved it; it was RED. Narrow strips were woven then sewn together to create the width. Did you notice the areas where the weaver substituted white for red?

It could be interpreted in two sets of Seminole piecing, but that almost seems too literal.

The sawteeth were progressing. While sewing more units of six, I had an epiphany. These rectangular units compare to the red rectangles in the Ghana textile.

I pulled quiet cream/white fabrics, quickly deciding white was too severe. Next I pulled browns, tans, yellows or reds to create an insert. The Ghana textile called for bright red; the recipient called for neutral. After cutting a few samples, I got lucky. M-N suggested combining the red and yellow polka dots after dinner one evening. Later I remembered this quilt in Rod Kiracofe's last show.

The way the maker cut and seamed along half the polka dot, sometimes matching the colors of the dots and plaids, is masterful. Thank you for the guidance, M-N!

The yellow reverses to blue which added a subtle variation. Although I tried fussy cutting, the dots on my prints are much smaller than Rod's. My polka dots roam free.


I chose to keep as much of the sawtooth units as possible and optimized the cutting lines to that end.

This quilt underwent a series of unexpected changes during construction. Evolution or metamorphosis? Did it change in response to external forces or was this quilt always there but needing time to develop? It was beneficial to look, listen, and ponder - steps I intend to do but frequently neglect to take the time. I'm so pleased with the top; the recipient likes it, too.

It's on the design wall while I ponder quilting designs.

InLinkz removed because site was hacked.

Our book study group is currently on the doodle quilt in Sherri Wood's Improv Handbook. One month we simply doodled in our sketchbooks. ML led the meeting, posed thoughtful questions and kept us (ok, me) on task. Clockwise from top left: Tami, MK, 5 pages by M-N, me.

Tami and I discovered our first sketches were quilting designs; we had to lift the pencil to create piecing designs. She chose to explore assembling orphan blocks and other leftovers and may use a round robin/medallion format.  MK decided her striation layers called for more study. I like the Housetops (or quarter log cabins) and want to repeat them in more colors. But my doodle blocks will start with long sawteeth or triangles.

M-N had the most interesting sketches. Starting with discrete units, she connected them with theatrically motivated designs and realized she had sketched The Odyssey! Hopefully she'll write a post about it soon.

We spent another month sewing some of these ideas. I considered restarting to center more on Sherri's guidelines but finally decided to continue with one design. I cut the rectangles freehand but used the ruler on the diagonals.

Another friend is graduating college this spring and wants a quilt. Since she attends LSU I expected purple and gold but instead she likes blue and neutrals. It seemed like a good idea to make the sawteeth in her color scheme.

Lots and lots blue and cream/beige sawteeth. My first thought was to sew rows of teeth the length of the quilt and separate them with long tan sashing. To emphasize the fabrics, I sewed pairs of matching triangles together. In fact, sets of 6-8 triangles in the same fabrics seemed to work best.

My computer is still out for repairs and I'm out with a cold. It takes an entirely different skill set to try to post from my tablet. And I can't click any links. But I did get the spiderwebs sewn. Now they need a border.

Here are some closeups of a few.
It's still unpressed to keep the sides from stretching. And it needs a border. I've always wanted to make a vine and leaf border. This seems like a good place to put one. But... which fabric for the background? None has enough yardage to go all the way around. Some thinking is in order.

All my technology failed the same week. Both laptop and camera are on the fritz. As I am out of town, it's difficult to recover quickly.
Here's an old photo of my circles - barely a week in. I started November 4 and have twenty-four finished. More are cut, ready to sew as we travel.

Email ThisBlogThis!Share to TwitterShare to FacebookShare to Pinterest
Labels: quilty365

This is was my second-oldest UFO. We exchanged the blocks in the QGGH Evening Scrap Bee back in 1992. I wouldn't remember but I made a label... for the top. Since then, it's moved with me every time. Good intentions but...

I finally realized I will never quilt this. Quilting sister (QS) ordered me to send it to our dear friend, Peg Collins. Her email is collinspeg(at)hotmail(dot)com if you'd like to speak with her about doing some work for you, too. She's so artistic and custom quilts beautifully. In fact, she won a ribbon at AQS a few years ago. So into the mail it went with a note: no hurry, do what you think best.
Peg used a variegated thread, black batt and her fabulous design sense. How exciting to have this complete and in use for the holidays. It's still pretty after 23 years!

I do remember making the back. There wasn't enough fabric to make an entire back and with all three kiddos covered in chicken pox, visiting the fabric shop was not an option. These two seemed to go together. It's ordinary today but back in '92, this was quite a wild back. 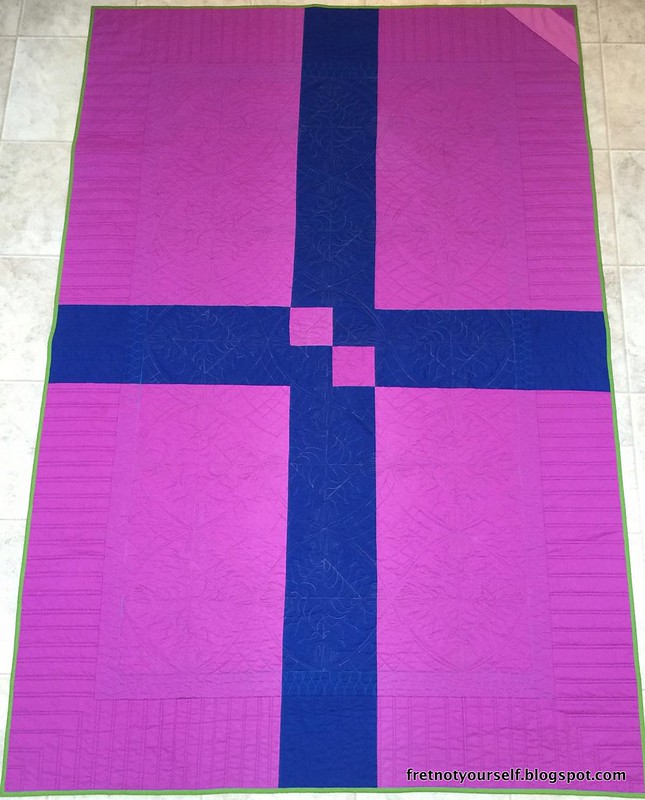