On to the Borders

My quilt had too much background when the center was finished so I decided to add colorful borders.
By cutting both remaining white-on-black prints I made the inner border. Can you even tell there are two different prints?

Next I added the piano keys outer border. Being really tired of using the rotary tools by now, I used scissors to freehand cut 7" slices from only mediums. Next I stacked sets of four and cut four sets of keys from each stack, then rotated the cut pieces. I sewed four sets of four together. These sets were combined randomly to create the four sides in the photo below. The variations in width and seam line are especially effective to me. And now, instead of looking washed out, the light background shines. 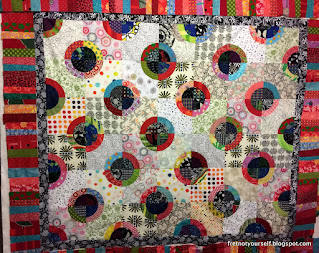 The random widths and organic piecing liven the quilt up. But it still needs something more.

Locating the side of one of the quarter circles, I folded the border and used the acrylic template to cut half circles. 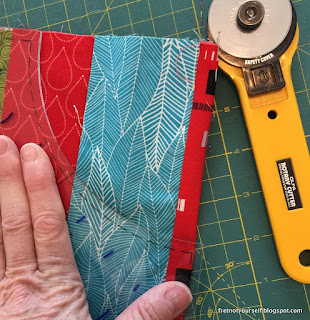 Then I inserted two quarter circles and arcs. To change things up a bit, the arc is medium lights and the center circles are lights. 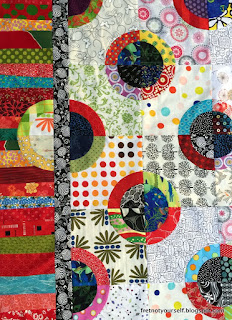 On to the other sides.

Remember the next Ad Hoc Improv Quilter linkup is next Tuesday, April 26. We look forward to more interesting posts and hope you'll join in.

I like the addition of the arches in the borders.

applause! applause! It's so cool. I want it! I want to make one! The border is just perfect with the center. It's so hard for me to design borders. LeeAnna

I liked it before, but it is way, way better now! You are right, the medium-toned border makes the centre shine. And those light circles are just fun! GREAT job!

I always like piano-key borders and freehanding them is brilliant. It gives them just a smidgen of irregularity that makes them dance. Great idea and the inset half circles are a surprise. It is reminding me of an old style painted carousel somehow. You have a great eye, Ann.

Thanks, Sandra. Amazing how a simple border changed this quilt.

Thanks, Patty. They make a difference, don't they.

Thanks, LeeAnna. I do like the way it's turning out. And I enjoy comparing my colors to Freddy's. Lots to learn about dividing values. The half circles make my border a bit unique and that pleases me.

Thanks, Monica. The color range was too wide or something to be a successful low volume. I'm still amazed how the border sparks the center lights. And the half circle was loads of fun.

What great words: freehanding and irregularity. Those are exactly the ones I should have used. It does make the border dance. Much better than equal widths in this case. And I'm surprised about the carousel. That's a lovely image. Thanks, Sue!

What a wonderful idea for your border! I am a fan of piano keys but adding the half circles lifts the keys to a whole new level.

It's a very regular thing that I open your blog post and exclaim "Oh Wow!" Ann. The piano keys were just the right addition and I love the half circles sneaking across the border!

oh my heck, I need to put up on my blog, www.FabricFulfillingItsDestiny.blogspot.com, and show you the quilt flimsy I just finished yesterday: Bullseye quilt made by my grandson's 1st grade class. We could be twinsies. Love your random cut piano key border.

Brilliant border solution, with your innovative use of your scraps from this quilt. The half-circles in the border will add even more movement and fancy.

Thanks, Maureen. I felt this needed more than just the key border and this was a simple fun addition.

You are always so kind, Lara. And funny. I love the idea of sneaky circles!

What fun you must have had sewing a top for these children. I know they will love it, Twin!

Thanks, LeeAnn. I was trying to use up
Some extra arcs and circles. Always better to keep the scrap bag lean.

Thanks for writing, Judy. I hope the e cola nation is clear enough. Sewing half circles I. Was not any harder than quarter circles and I only sewed the outer edge as a half circle.

The borders really bring the quilt together and like you say, makes the center glow! Love how vibrant it looks now.:)

I never think of borders but they can make such a difference: yours have really pulled everything together. I love Sue's image of a carousel - fits perfectly.

That was an inspired decision Ann! I love the way you think out of the box (or out of the border in this case!). It's so exciting to see you working on the fly. It's going to be such a lovely quilt :)

Thanks, Audrey. The border has changed this from a quilt I didn't like much to something much more attractive.

I know they aren't fashionable these days but I like borders. They create a change of pace and can really change the quilt. Thanks, Kaja.

Thanks, Stephie. This quilt is going to a friend. Not only do I want him to like it, I want to feel pleased with it. Now I do. Isn't it interesting to follow quilters' progress?