The greatest accomplishment is not in never failing, but in rising again after you fall.
~Vince Lombardi

Rarely has my dear husband (DH) been as excited about a quilt as he was about the Phillies baseball quilt I made a few years ago. He insisted it had to have decals on it. I demurred but he ordered them anyway. One was not enough. He purchased four. And... he purchased several Giants decals, too, then looked at me with his sweet blue eyes. Because, of course, he'd love a Giants quilt.
And I love him. I intended to make it immediately after the Phillies quilt but family emergencies intervened. So I bundled a collection of fabric and set it aside. Now is the time to get this one done. Except, the templates can't be found.
Looking at the first quilt, I was sure it could be improved. Here's my first baseball player, a right-hander. The socks are gone; his trousers reach his shoes. His legs are shorter; still longer than his torso but the block is now square.
And here's the second one. Including skin tones of all the players required different greens for the background. A couple of days were spent moving the fabrics around until everyone shows up reasonably well. 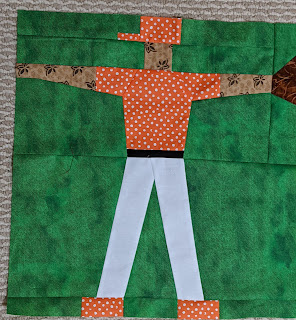 Learning from my first foray, the caps and shoes the same color. Teams have limited colors and it's a faux pas to use any others. When caps are a different color than the shoes, one of them tends to fade into the {future} sashing.
Stay tuned for more players. 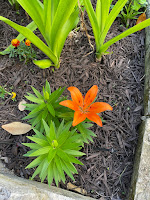 Our lilies are blooming. The first is as bright an orange as Giants shirts but I've forgotten what type it is.

The Crowded Grave is my next book in Martin Walker's Bruno series. As Bruno is drawn into preparations for a summit between France and Spain, archeologists looking for Neanderthals instead turns up a skeleton with a Swatch. Martin’s love of this region is evident in every page and makes me wish I could visit for a year or two also.
Enjoy the day, Ann
Posted by Ann at June 08, 2021

I remember that Phillies quilt; it was so cool! I love the polka dot fabric you are using. It's much more interesting than plain orange. Your lily is so pretty! The deer eat the flowers that are easily reached so I have passed on most of my plants to someone work with. No sense growing plants and not getting to enjoy the flowers.

What a good wife you are. These are really happy quilts. xoxo

I went back to read all the posts about your Phillies quilt -- what a great backstory -- and an even better quilt back! It will be interesting to see how the Giants quilt will be alike-but-different from the Phillies.

I enjoyed watching the Phillies quilt progress. It will be fun to see another one especially this time of year.

Hooray for another baseball quilt! I wonder if I could adapt idea.

I can’t believe it’s four years since these fabrics were pulled. Polka dots are cute, aren’t they. I considered a Hawaiian print, too.
We don’t get deer but lots of snails. They’ve eaten the marigolds and are trying for the petunias. I need some diatomaceous earth.

My halo is shining. Haha.

That story still makes me laugh. Such big boys acting like little kids. I’m flattered they wanted quilts. My son says 5 we’re st their last get together so they are well used. Who could ask for more!

I’m having a blast with these.

I thought it would be mindless to make another but it’s fun to think about the details. Still planning more players and the back.

Interpreting them for a different sport would be fun. One sone wants American football. What would you do? Rugby or soccer or hockey or cricket?

Cricket is the game of choice here.

True love to make more than one!:)

You are such a clever sister! It will come together with lots of fun, I'm sure.

I do love my guy. Thanks, Audrey.

Thanks, Mav. I’m working on it and I know you will keep me in line.

You will have one very happy husband! Looking forward to following your progress.

what a great theme for a quilt and the pattern is awesome.
thanks for the book recommend.

I hope so. I want to finish this soon although it is so hot here right now.

Thanks, Barb. It’s a treat to work this out and fun to see the changes from the previous block to this.

love these squares and your adjustments - would love to see pics of the completed tops or quilts!

Thanks. First I need to finish it.

Bruno is great too. I have all of them, and have been spacing them out so I can prolong the pleasure of reading them.

I’m trying to prolong them, too. He writes well. I enjoy the way he blends his previous non-fiction writing with this series. It adds interest and depth.