I recently handed down two quilts. M-K organized a drive to help some families whose homes burned so Floating Squares went there.

As we were cleaning and reorganizing, Louisiana son found this older quilt and took it home with him. This photo shows the whole quilt but the colors are off...

while this photo has truer colors but poor layout.

Friends and I made the blocks in an exchange. They were a simple six-inch four-patch: finished measurements 3-inch square, two 3-inch triangles, and one larger 6-inch triangle.

The original plan was a barn raising layout with colors lined up on each row. That looked terrible, perhaps because most of the fabrics are dark. Moving similar colors into "blocks" made the quilt pop for me. Then I rotated the center of the barn to create a spiral.

I've always been pleased with this quilt; so glad to pass it on to another generation.

Kaleidoscope of Butterflies returns September 1. What have you seen and done this summer? 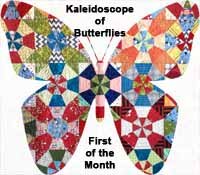 It's hard to get back to my old routine after taking off most of the summer. Quilts were left in progress  and I've had trouble remembering the plans.

While still a difficult time, this month has been more fun. We drove across the western US. As schoolchildren we learned a line called the Continental Divide separates rivers flowing east to the Gulf of Mexico or Atlantic from those flowing west to the Pacific. This is not quite true.

The Great Basin encompasses about a fifth of the country from the western Rockies to the eastern Sierra Nevadas. Water in this area flows nowhere. It can only evaporate leaving alkali beds, salt flats, and several salt lakes. The Great Salt Lake is the largest, but there are several more.

Mono Lake is one of them. It's so salty birds have trouble paddling in this lake; they're too buoyant. Tufas formed by fresh water springs famously tower above the lake's surface, in part because the lake has been drawn down to transport water to other parts of California.

Fortunately, this is no longer allowed. Unfortunately, the west has been in such a severe drought that the lake level is still falling.

Rod Kiracofe was the guest speaker at our quilt meeting yesterday. Although not a quilter, he has done more to advance quilting as important American art than anyone I know. Starting in 1983, The Quilt Digest juxtaposed antique works with contemporary art quilts highlighting the commonalities. He went on to write The American Quilt, a seminal work that displayed the development of quilting designs and styles through time when other books organized material by block design. As a maker, I learned skills from the latter layout, but as a student my understanding was enriched by Rod's history.


I believe his greatest genius is, as he wrote in Unconventional and Unexpected, his "practice of creating new ideas in the larger cultural conversation." This is most evident in the exhibits he curates where he opens my eyes to relationships between different groups of people or art. For example, his exhibits last year at the San Jose Museum of Quilts and Textiles and at the Sonoma Art Museum.
Hearing him again has reignited the need to quilt.

Edit: Monica suggested that since we both host this linkup Kaja and I each add our posts below to help others visit both. Such a good idea. Thanks!

InLinkz removed because it was hacked.
Posted by Ann at August 23, 2016 16 comments: