Still working on the Phillies quilt but I have progressed to the back where I'm adding pieced words. And it's so much fun. Why did I hesitate so long before trying it?

After piecing his name one letter at a time, I totaled each remaining letter and sewed batches. It worked well until the m's. There are two, right next to each other. For some reason I pieced them exactly the same. It looks a little dorky. Oh, well. Dorky is good.


Of course, adding these sentences to the back is a major point but, as importantly, the back needs to be filled. So why cut fabric from the sentence below when I'll just sew more back onto it? Instead, I simply straightened the seam line between the two words and squared up the perimeter. 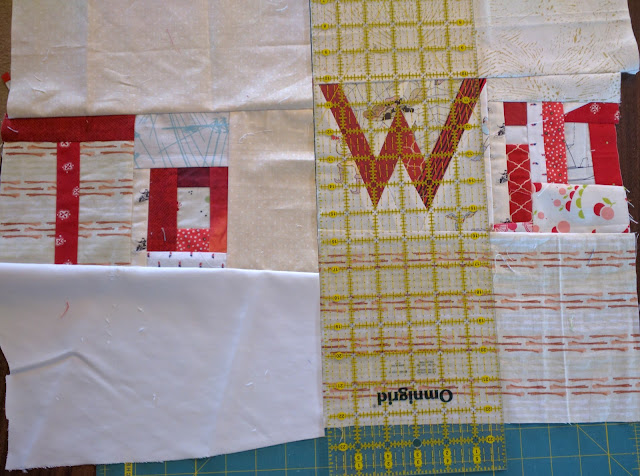 I thought this would be enough but it still needs something else. One more sentence or phrase. 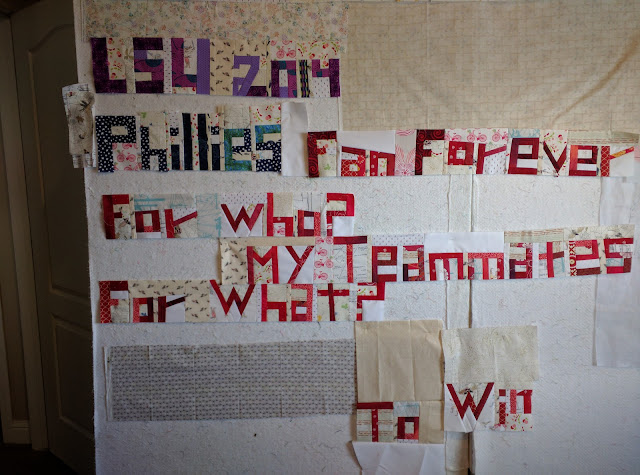 The "For who?" quotes Aaron Rowand who played fearlessly for the Phillies until signing with the Giants in 2008 and helping them win the 2010 World Series. {Yes. I searched until I found a great quote that has a link to the Giants. Even if they are in the cellar this year.}

I finished piecing some dorky letters, words and a sentence yesterday. It was the part of a UFO I was not looking forward to doing but glad I was challenged to do so.

I'm not any kind of sports fan (speaking of dorky) but I sure do like how your quilt is progressing!

I smile every time I see your quilt progress! Such a fun quilt. Your letters are looking wonderful!

We are the dorky word twins! I'm so enjoying my words but am glad at least you finished a UFO. Always good to move one out.

Thanks, Audrey. This one is amusing me, too. I'll be sorry when it's gone. But DH is lobbying for a Giants themed one. He's very persuasive. ;-)

I like your mix of letter sizes here, what are the measurements of the finished quilt?

I agree with Audrey: this just makes me smile. I love where the letters challenge is leading you.

What is the LSU connection? glen from Baton Rouge!

I love how you connected the Phillies and the Giants. And I second your husband - you need to make a Giants one now!

Like most of my quilts, it ended up bigger than originally planned. I think it's about 85"x95"? Haven't measured lately.

Thanks, Kaja. I'm so sorry I didn't try this earlier. I always thought I had "nothing" to say but this is a blast.

All these guys are LSU graduates.

He paid you to write that, didn't he, Fern?
Actually a bunch of ideas are running through my head.

When I make a complex letter, it usually comes out larger! But either way, I think the different sizes add so much to the charm. This is going to be a fabulous quilt. :D

That's true. I didn't try to be accurate, just sketched letters to get an idea of how to piece them. I do like the primitive look of the words. Thanks.

And you must be Tiger alumnus, too.

Such darling letters and sentences. I wish I had time to play but right now I'm a little overwhelmed with other projects. I love the way these are turning out. Appreciate the LSU explanation, I was wondering also. Oh and couldn't an "m" be an "E" if you turn it sideways?

I know about being overwhelmed. This is the last graduation quilt - 3 years late. That's why they all had LSU and year. The others were written with thread though.
You're right. That m could be an E.
I think about you when I visit my son in BR. Enjoy.