There is a strong strain of individualism and risk-taking in Texas. We'll do what we want to now and worry about the future later.
This is a case in which the future blew in and hit the whole state.
H.W. Brands, historian at UT Austin
Personally I made it through the winter storm in Houston with no broken pipes but turned off the water all week. And I have lots of quilts. ;-) There were so many on the bed to stay warm, I couldn't move once I got in. By Sunday many were wearing shorts.
It shouldn't have been this bad; however, our legislature never required power plants to winterize so many chose not to despite similar problems with storms in 1997 and 2011. Most of Texas' energy comes from natural gas and almost half went offline Sunday and Monday; however, several state legislators blame renewable energy that only provides about 10% of our power. Wind turbines in colder northern states {that were properly winterized} did not freeze.
Mayor Turner led us through Hurricane Harvey, the Covid pandemic, and now winter storm Uri. He and his staff worked all week to open warming stations and distribute food and water. What a good example they set by continuing to do their jobs in difficult circumstances.

Funny how this works. My Hatchet blocks inspired Wanda to make her own version. The quiet beauty of her quilt inspired me to try a new quilt with a limited color palette: yellow and green. It was an easy pull because the fabrics are in a pile on the floor. They either needed to be sewed quickly or packed.
Part of the reason Wanda's quilt looks so good is the uniform quiet background she used. I don't have enough of any cream right now {and I'm still in "use it up" mode} but I found a small collection of quieter prints that work with these light colors.
In addition to the backgrounds, there are eight greens and two yellows for the ribbons. Halfway through sewing it's obvious they aren't working as ribbons. 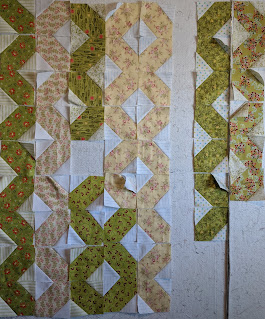 The next idea was a "wave" through the fabrics but this layout looks worse if that's possible. The abrupt line between yellow and green looks more like a shoreline. 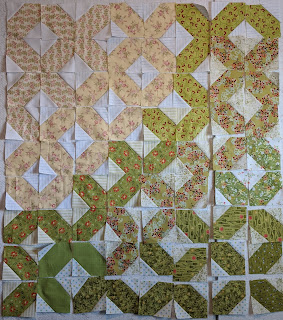 The most common layout of Hatchets is the X. I thought about alternating yellow and green Xs but {of course} they aren't evenly distributed. So they need an arrangement that disguises that fact. Starting with a yellow X, I surrounded it with some green and then offset the next yellow X. Suddenly an idea appeared.
If you know me, you know I will end up with some mathematical solution. Something's a bit off here. 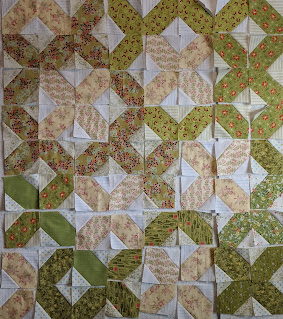 But a couple of minor changes on the bottom rows settled that. 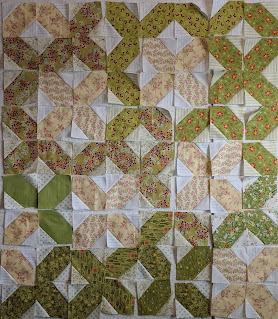 With the design laid out on the wall it was easy to sew up. 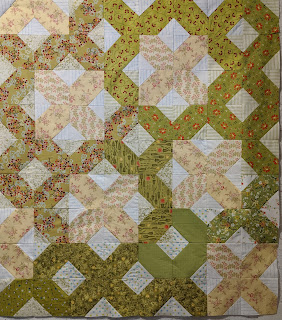 The plan is to gift this as a toddler quilt. The recipient's mother loves yellow and I think these old-fashioned fabrics will suit her well.
Reading
When Nora deliberately overdoses she arrives at The Midnight Library, a sort of way station between life and death. Each book is a parallel life based on every different decision she could have made. Infinitely many books. Mrs. Elm, her former school librarian and current librarian here, directs her to look at her regrets and see how the other path turns out. But other people don't stay the same so some books lead to wildly different relationships with people in her life.
I enjoyed Matt's idea that "the road not taken" isn't always smooth and perfect.
Monthly FUR (Fabric Use Rate)
Although Hatchet 3 and Shadow Star are finally complete tops, there were no actual finishes in February. YTD = 2 yards.
Enjoy the day, Ann
Posted by Ann at February 23, 2021