Here's my current progress on the New York Beauty blocks. I'm making haste slowly. Somehow the colors in this photo are a bit off. Older posts here and here.

I started them in a workshop with Karen Stone at the Quilters Guild of Dallas... sometime around the millennium. I made a spreadsheet of the colors to ensure they were spread across all the different parts of this block. Unfortunately it wasn't working as the quilt got larger. I threw it away and simply grabbed some fabrics to expand the conversation.

Trimming the seams from the back really helped get these pieces to fit properly. Here are three steps in a row.
Line up the seam allowances of two fabrics with right sides together. Set them along the dotted line so the one closest to the paper completely covers the lower numbered wedge. Check that the other fabric will cover the higher numbered wedge when it's turned then sew. Fold the paper back along the sewing line and trim the fabrics to 1/4". Then you can align the seam allowance of the next piece properly.

Using scraps to sew off the end of a "regular" project keeps the thread from tangling and knotting when starting a new seam. Originally I sewed onto a scrap (and threw it away) but eventually realized that a scrap block seam serves the same function AND finishes an extra top before you know it!

In the past I made little nine-patches but about two years ago I returned to log cabin blocks as my leader/ender project. And not just log cabins, but half-inch logs. Crazy.

I haven't paid much attention to them; simply set them in a bin. During a bout of cleaning last week, I pulled them out. What a huge collection - so many that I considered making a bed quilt. Finally decided they worked better for baby quilts. That's helpful; several are needed soon.

Every different corner a block has increases the setting variations that can be made. Part of the reason log cabin is a perennial favorite is that it has four different corners. Here are some of the variations I laid out on the design wall.

These Streak of Lightning variations use some "all light" blocks to create more open space.

By rotating every other row of the layout above, I created this triangular setting. (Definitely making this one!)


The star is rotated into a Sunshine and Shadows variation.

A bit of zig zag on this outer border differs slightly from the previous one.

There are enough blocks to make five baby quilts.

I finished a Sunshine and Shadows log cabin and a Barn Raising log cabin a while ago. It's time for a different leader/ender.

Another trip to San Francisco, another tour. This time, we walked around Telegraph Hill. These 1937 apartments are decorated with raised plaster called sgraffito (yes, same root word as graffiti) by Alfred Du Pont. An outline of California appears behind the image of Califia, the mythical queen of the island of California in a Spanish novel from 1500. It was so popular that when the first explorers mistook Baja California for an island, they could think of no better name for the land.

Lauren Bacall's character lived in one of these apartments in the 1947 film, Dark Passage, with Humphrey Bogart.

Around the corner are these gorgeous Carpenter Gothic homes. The middle is a former grocery store. The lavender one (then painted dark brown) starred in The Streets of San Francisco with Michael Douglas. The lower floors of all the homes were added when the city paved the streets. Can you believe how much paving lowered the street? And it's still so steep, it's scary.

Of course, loads of blooming plants wherever you turn.

The Cowboys quilt for my son's former roommate is quilted and bound. Next week I hope to deliver it to the recipient who lives on the West Coast. Hooray! Here's the previous post with information about making the top. 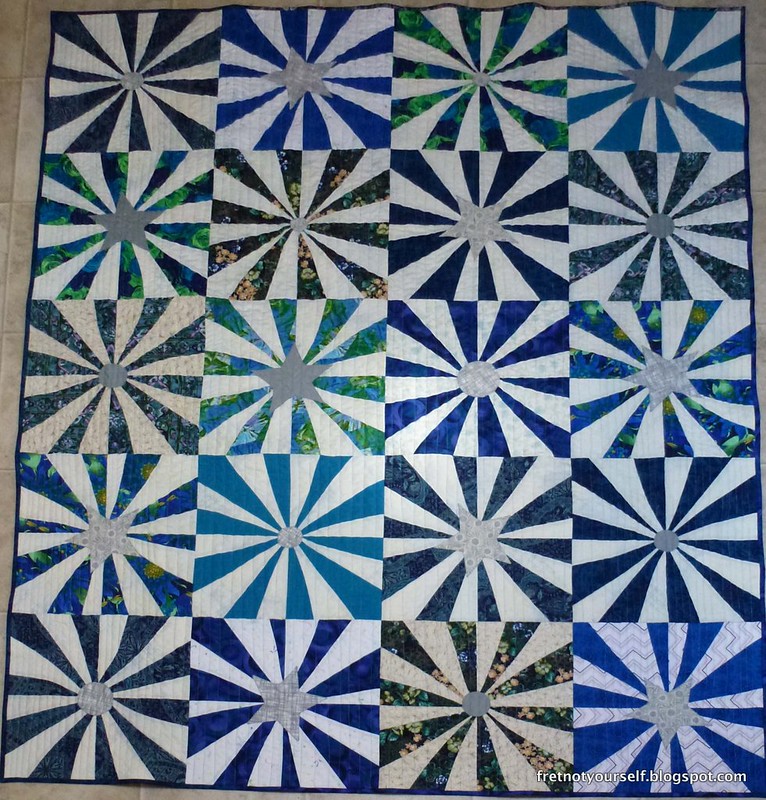 The quilting doesn't show as well in the straight on detail view as in the low angle views that follow but you can see the variations of the quilting lines better. 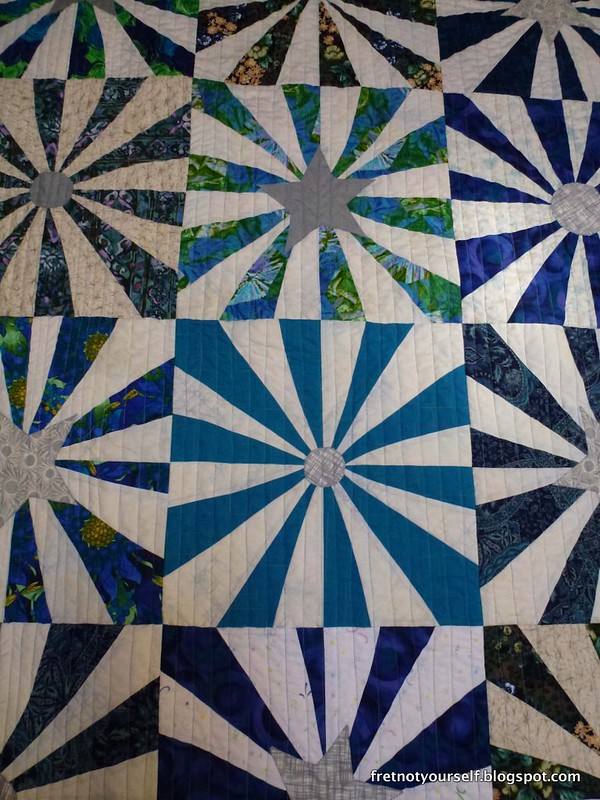 Originally I planned to use the darker blue thread for quilting. Too dark. The white is too light. But the medium blue is just right. Funny. I always try to get light and dark fabrics (since we tend to purchase mediums) then drive myself crazy thinking I will need to change threads frequently. But I'm finding that medium threads blend better across all those fabrics.

This was my third attempt to use the lovely YLI 40/3 variegated thread in Seamist. My machine hates it - even when it's only in the top and not the bobbin. I finally switched to Sulky Blendable 30/3 variegated thread. It's a similar range of blues. Cindy Needham told me thread sizes vary by manufacturer and I certainly agree now. The Sulky should be heavier than YLI but in actuality, they are the same thickness. What a puzzle. There are so many threads to use that I can choose another. (YLI makes some of my favorite threads; this is the only one I've ever had issues with.)

A friend who hand quilts thinks it would work beautifully for her so I've passed it on. 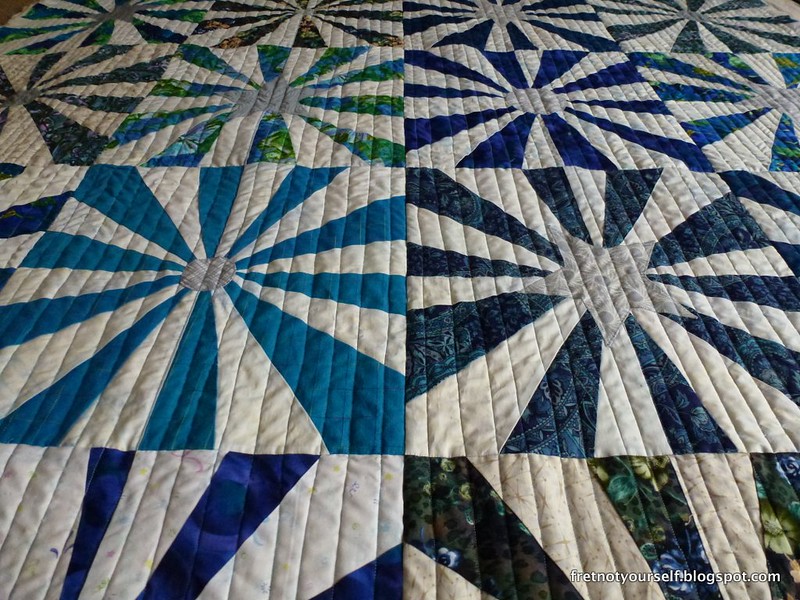 I considered quilting very straight lines since the blocks are squared up before sewing them together but decided free-hand straight-ish lines fit better with the free-hand cutting of the pattern. I started sewing lines about 2-3 inches apart and came back and filled in until it looked done. Spacing ranges from 0.75-1 inch. The quilting didn't look good while I was sewing (with my nose very close to the lines) but I really like they way it looks on the finished quilt. So... don't put your nose right on the quilting lines and you should like it, too!

The planes on the back of Propellers and Planes were such fun I've decided to try to work harder on the backs. Usually I find large rectangles of fabric, sew them together and call it done. This time I made a simple medallion of the pieces instead. Continuing one blue border to the edge looked interesting.

Blue remnants made great binding, cut 2.25 inches, folded in half and attached by machine. I've started pressing the binding after I sew it to the back (and before attaching it on the front.) It certainly makes it easier to wrap the binding properly.

Look what I saw early this spring! For the past decade egrets have chosen to nest in the trees on this street. Who knows why. It's the furthest from the shore of any colony. The rookery is home to about 20 percent of the egrets in the Bay Area. Closing the street to cars provides greater safety for the birds because any younglings that fall (or are pushed) from their nest can be rehabilitated by wildlife personnel.

Last week when I walked by again, these lovely birds were busy setting up house. You wouldn't want to park on the street; they protect their nests by pooping - smelly and acidic. I stayed on a cross street that is not closed. No bird poop conditioner for me, thank you very much.

Although they are elegantly graceful and snowy white, their voice is not nearly as attractive. They make an odd gobbling sound. Oh, well. I can't sing on key either.

To encourage newer quilters and build friendships, several members of SCVQA started Quilting 101. This open-membered group meets monthly to sew. There's always a short lesson taught by someone in the guild. Needless to say, Q101 is very popular.

Jane demonstrated a fussy-cut hexagon quilt last month. She's made many of these from Asian and African inspired fabrics that are beautifully sophisticated. Although I admire them, I need another baby quilt. Think small and happy. A bit more than two yards of cheerful fabric created this top measuring about 48" by 52".

Could you determine the print of the original fabric? Look at all this drive-in food: hot dogs, hamburgers, fries, soda, cupcakes, ice cream sundaes, popcorn, popsicles and candies.

Fabric is cut at the repeat and then stacked six deep. When the equilateral (60 degree) triangles are cut, there are six alike. Then the fun begins. The kaleidoscopic effect changes depending on which triangle point is in the center. This is definitely a quilt that benefits from a design wall. No matter which arrangement is originally chosen, changes need to be made.

The first layout was too busy. (Funny. I usually use 50-200 fabrics in a quilt but using one is "too busy.") I wanted a place to rest my eyes. I forgot to take photos until solids were added but you can get a feel for it by looking at the lower right of the completed top.

I found three solids that might work. Two are above. The darker one looked better against the yellow sections so I thought yellowish green might work against the bluer sections.

I cut some of each and rearranged the triangles on the design wall. The two solids are also being tested as borders. 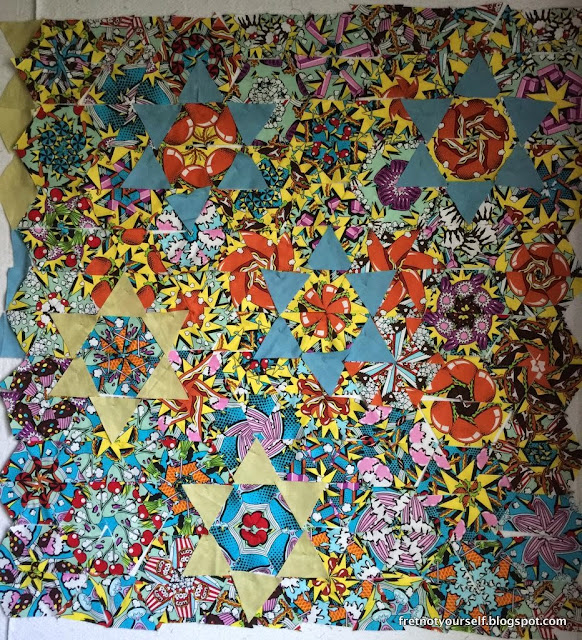 One of my favorite sextets is the group of cherries in the lower left. They are lost in the photo above so I added more solids and rearranged again to give them more presence.

Here are some detail shots. My favorite hexagon has a spinning ninja star effect.

Lara at BuzzinBumble wrote an intriguing post on matchstick quilting with different threads. Something similar might work here.