The Rose Quilt is Finally Finished

"If you want to hear the sound of God's laughter, just tell Him your plans."

I like to pretend there aren't a bunch of quilt tops waiting to be quilted but cleaning the sewing room out brought them to the surface. No more kidding myself. One is the Rose quilt {last worked on September 2018. Yikes!} Why did this pretty quilt end up stuffed in a dark corner?

Truthfully FOMMWQ {fear of making a mistake while quilting} hit hard. Every idea became much too complicated. Despite my trepidation, the stems were easy - just some FMQ loops...  until running out of green thread. And you know how hard it is to purchase more. Hahaha.

Still, quilting the roses became an ever-larger nightmare. McTavishing seemed like it would make petal-like curves. Great idea but heavy stitching might make the quilt stiff or make it pull oddly if everything else wasn't quilted equally closely. So I warted and worried it to death then gave it a quick burial in the closet. Guilt arose each time it was opened.


This past week it occurred to me that the roses could be an improv challenge. Remember Kaja's flower post? Ok, there are several flowery ideas running through my mind but at the rate I'm going it may be next year before there's time to work on them.  So...

After watching YouTube videos by Karen herself and Leah Day, I found Amy Johnson whose curlicues spoke to me. About the same time I realized the quilting could be spaced further apart. {Too soon old and too late smart.} A few hours practicing the technique with dry erase marker on my vinyl overlay gave me the confidence to begin again.

Photos of these overlays on top of the quilt didn't show well so here they are against the design wall. This is a practice rose.


The result of facing fear is often the discovery that it's not that difficult. Nike is right. Just Do It!


Two sections down; only the background left to fill. Julie's combination of fans and flowers would make a garden of flowers for the roses to emerge from...  and they could use more flowers in their garden. ;-)

In the first attempt petals curved and hopped. Unfortunately, I'm a hopper. My curves get out of control quite easily.


After several iterations, my flower petals are much shorter, more like scallops. And most of my fans turned into spirals. Fans or spirals. Both seems okay. My main takeaway from all the practice is that the flower petals should not overlap. A few peeking through the arcs seems better.


The light blue thread was very hard to see but slowing my speed kept me from crossing quilting lines.  It only took two days to complete the quilting. After a quick wash and dry the quilt crinkled beautifully. {This is why I love Mountain Mist batts. The shrink just enough. Like Goldilocks and the Three Bears.}

There was just enough blue gingham print (not yarn dyed) for the binding. Well, one skinny strip went into the scrap bag.


Previous posts:
The back is a conglomeration of floral fabrics to echo the pieced ones on front. 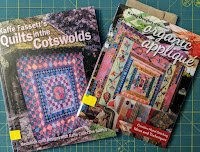 At the library this week I found two, count 'em TWO, new quilt books and snagged both to read. Quilts in the Cotswalds by Kaffe Fassett and Organic Appliqué by Kathy Doughty are thoughtful reads with my morning coffee. I want to return to large scale prints and these both encourage that. Reading about creative methods sparks new ideas of our own {or you can follow their designs.} These books even have coordinating covers.

nice! I met Amy Johnson at a sacred Threads show one year, she is so charming and down to earth. I enjoyed reading all of this post, and get fear of making a mess of quilting too. It creates UFO's. Your solution is great, a lot like my zendoodles actually. The crossing over of two mediums. I've been doing close echo quilting of shapes for years and didn't know people called it mactavishing.
I'd like to find the organic applique book too.
Leeanna

The quilt turned out so beautiful! I have suffered from the fear of starting something because of not wanting to mess up too! I have a black and white quilt top that has been in the UFO pile for years because I don't know how I want to quilt it. I need to just get it out and do it!

It's a beautiful quilt! I get where you are coming from regarding the machine quilting. I always worry I'm going to mess up a really nice top with not-so-great quilting.. It's all about practice! And you did a fabulous job!!

Now, THAT is a show-worthy quilt. Hope you'll enter it somewhere. And I can identify with FOMMQA. "Just do it" is right!

Just beautiful. Love every bit of this one. I have a few fear-based projects too but when the timing is right they seem to surface and you're right - its really not that bad.

Ahhh, it turned out wonderful.

The colors in your Rose Quilt are super!
Lovely finish and process report. All the quilting tutorials are good, thanks for sharing.

Wow this is gorgeous! The gorgeous roses, the coins and the magnificent quilting all combine together to make a spectacular quilt. Great colors too. By the way, September 2018 is just yesterday. I am still working down my quilts I started in 2003!

I am happy to see this one finished. Well done for conquering your quilting anxiety. In the end the mix of flowery, curvy, curly shapes seems like a good fit and I like that by varying the pattern you are adding an extra layer of interest too. Congratulations!

How interesting that you met Amy. I'd like to see Sacred Threads sometime and wonder what you thought of it. Yes, fear creates lots of UFOs. Zendoodles would give me easy practice FMQ; thanks for pointing that out. McTavishing is sets of four curves close together rather than echo quilting. It's always good to read your comments and posts, LeeAnna.

Thanks, Patty. We really do a number on ourselves when we don't keep moving ahead. Marking the overlay helped me figure out the quilting designs. Finishing these while they are still in style is so much better. And the UFOs I've folded away just weigh on me physically. Wow, that sounds deeper than intended but they do bug me. I don't have the money to have each quilted professionally so I need to keep practicing that step.

Thanks, Claire. Isn't it funny? I've quilted almost every top I've made so I have as much practice quilting as piecing and it still bugs me.

Thanks, Nann. The colors worked well. I like red and turquoise and this turned out better than expected. And it's done! I'm not sure what I'll do with it but may put it in my next guild show.

Thanks for writing, Marie. How does fear overwhelm us in the middle of these projects? If they didn't look good while piecing, I doubt we'd even want to quilt them. So why do we stop when they do look nice?

Thanks, Janie. YouTube is becoming a great resource. I'm so impressed with the courage of people to post these tutorial videos.

How kind of you, Shasta. Those reds and turquoise always appeal to me. It was an enjoyable challenge to figure this quilt out. I've had some really old UFOs and still have some approaching 20 years. What a shame to leave them hanging so long. Good luck with your finishes.

Me, too. I fluctuated between a single design like fans or straight lines and individualizing each section. Way too much worry. Using the vinyl overlay helps me figure it out. I just need to put in the effort sooner.

Thanks, Mel. Yes, the stitching is always better but your tip to use vinyl eases my anxiety. Thanks so much.

Congratulations, Ann - it's absolutely wonderful. I really like your interpretation of fans and flowers (and I mix fans and spirals in many of mine, too - and my petals aren't very large). I hate that we are all so afraid to just dig in and go --- a little practice and a lot of courage and we show ourselves each time that we CAN. Hoping our pondering periods shorten with each success.

Thanks for your comment, your tips about fans, and your encouragement. We do need to just get to it, don't we? Every time we try, we certainly succeed and we need to remember that.

What a gorgeous finish. I think this is my fav of your coins series. I, too, have several UFOs that I have a fear of screwing up with my fmq. I usually put those in the hand quilting pile because for some reason I feel more in control with hand quilting. I think you've inspired me to experiment a little more with fmq. UFOs are of no use stuck in a box or closet so I guess any quilting is better than no finish. Congrats to you for getting 'er done!

Thanks, Cathy. I am trying to finish each quilt I start these days as well as clearing out the ones I set aside. As you wrote, they are no good in a box. I think we psych ourselves out with the quilting. I’m finding the vinyl overlay is a big help in gathering my courage because it helps work out a plan. Just put tape on the edges of one side so you don’t rub the marker remains on your quilt.

Beautiful quilt Ann, congratulations! I must try your method of drawing out a quilting design on acetate before attempting the actual quilting,I have never been adventurous on the machine quilting side but perhaps I can improve!

It helps me figure out what might work and get some muscle memory by drawing it a few times. My markers are wide so it's not as fine as the quilting but that doesn't bother me. Perhaps next time I'll purchase the fine-tipped markers.

This is one of my favorite ways of figuring out and practicing (multitasking, yay) quilt motifs for a particular quilt. Your fmq is beautiful and perfect for the garden. I call this ghost quilting because if you look carefully there's a ghost of the applique in the background. Thought-out, meaningful quilting. And as you improve, you can add more motifs to your design abilities. I snag ideas from Karen McTavish and Leah Day...oh to have those chops! Amy Johnson, I'm on my way for a visit. Thanks, Ann.

Clever you, Mary. Using a vinyl overlay is fairly new to me but works so well. It does build muscle memory, too, as you noted. Ghost quilting is a good name for including the theme of the piecing in the quilting. I hope you like Amy’s website. She was one of the first I found who explained ruler quilting - which I still don’t do.

Glad you paid attention to Nike and just did it. It is a gorgeous finish and I am loving the layered effect of roses on coins. Your choice of binding is perfect too.

Thanks, Preeti. I’m glad I buckled down before it was a complete relic. The coins make a good background with all the subtle color differences.