Worrying about things you can't control is a waste both on the baseball field and in life..
~Tom Swyers

Like the Phillies quilt, no one should be in doubt which team is represented. I appliqued Phillies on the front last time but the border is already busy enough so the Giants name must go on back. Large enough for to read from the opposite side of the park. 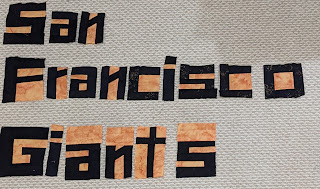 This is the last of the solid black fabric. I could buy more but trolling through my stash brought two black prints to the surface. The team name will be strongest because it's the greatest contrast.
And speaking of buying fabric, I purchased three yards of the orange batik seen here. Why did I think I'd need it? It turned out great for the writing on the back. There should be enough for whatever else gets written. I just need to decide. I don't want DH's name, or mine, or the year. It needs to be about baseball.
Here's some of the phrases under consideration:
It's time to make up my mind so the back gets finish.
Reading

Can you believe I found a new series just as it was published? Nev March debuted Murder in Old Bombay last year. The historical mystery is based on a report from her childhood about two young women who fell to their deaths from a university clock tower. Nev's story introduces Captain Jim Agnihotri, an injured Anglo-Indian soldier who reads about the deaths in hospital. Adi Framji, the widower and brother of the victims, hires him to look into events.
A good introduction to issues in colonial India. And I kept my maps handy to track the movements of the characters.
Enjoy the day, Ann
Posted by Ann at July 06, 2021

that is funny about the 3 yds of orange batik--you are also set up for Halloween ad infinitum..;)))my grandson's favorite color is orange and I made his college quilt (Spiderweb pattern) in oranges and B/W prints...
My Mom's fave was also orange--she had an ORANGE Karman Ghia car that she bopped around in...
anyway...your lettering looks super...I am still trying to figure out how to make the letters "USA for my proposed 4th of July quilt...
sigh...hugs, Julierose
(P.S. Take me out to the ballgame is my vote if you're counting votes) ;)))

What a great list of quotes. I know nothing about baseball so I'm not a good one to give advice but I do love the quote by Yogi Berra (who probably wasn't a Giant player either). "Cut my pie into four pieces, I don't think I could eat eight." I love putting the team name on the back so when you wrap yourself up in the quilt everyone behind you can read it - genious.

I love piecing words and including them in tops. Love where this quilt is going, really fun. #11 !
Rondi
rondiquilts@yahoo.com

10 and 11. My husband does that. takes out maps to follow characters.

haha i love #7 - your words turned out great!

...No crying in baseball. Love that from A League of their Own!

Glad you're enjoying Murder in Old Bombay. So many possible baseball quips. "It ain't over 'til it's over." And the Cubs' perennial, "Wait until next year!"

Yes. That applies to everything, Julie.

DH loves orange but I prefer coral or peach. It makes a great team color. So visible.
I’m thinking and hoping for one to really move me but not vote counting.

Yogi had the best quotes. Ideally I want the quote to fit with the team name. Both sides should be interesting.

4 is a giants slogan as well as a song. Steve Perry of Journey is a big giants fan and led the crowd in the song at several games.

I enjoy the words, too, and need to include some more often. The whole quilt has been fun to create.

How nice to have company with mapping. I thought I was the only crazy person who did that, Angie.

That has got to be one of the best lines ever. Thanks.

Yes. That’s a great line for baseball and the movies. Thanks.

I’ve been reading loads of mysteries and probably need to get back to non-fiction or poetry. Still it’s fun to read so many set in India.
Love your quotes. Just want them to relate to the giants… you could add them to your own baseball quilt.