Carpe diem! This past Friday was National Pie Day in the States. Quite delicious. But another Pi Day (3.14159...) is coming in March. This year we'll see 3-14-15. Quilters can celebrate by making quilts with circles instead of (or in addition to) eating pie!

These blocks were tucked in my stash along with some fabrics I planned to use. Pi Day is the new deadline. Propellers and the curve pieced tops should be quilted by then, too. Lots of pi for me!

What about you? How will you celebrate Pi Day?

There are many talented photographers in my family but I am not one. They very kindly take photos for me on all occasions. However, with everyone scattered across the country they are rarely on hand.

My youngest sister and I signed up for Ricky Tims' year-long online photography class. It was all her idea. I will learn basic photography skills such as how to do anything fancier than point-and-shoot. Baby Sis can improve hers since the class includes composition and photo editing.

Meanwhile, on the quilting front... I finished all the straight lines on Propellers (the name for my Steam Punk quilt.) Here's a photo of my worst straight line quilting. This block is near the center so was much harder to manage. I tried many methods to get the lines straight: walking foot, marking lines with pen and chalk, darning foot alone, ruler work (without the proper foot) and painters tape. All these methods work very well on a smaller quilt or closer to the edge of this behemoth (it's 116" square.) Just manhandling the quilt under the small throat plate made most of them ineffective closer to the center.

I think I'll quilt around the blades next. More or less than the straight lines? Would you use 'swirls and pebbles', stippling, McTavishing or something else? In true Scarlett O'Hara fashion, "I'll think about that tomorrow."

Steam Punk's been pinned all fall. I even ditch stitched the sashing to stabilize the quilt with dark YLI invisible thread in the top and grey Aurifil 50/2 in the bobbin. Then I was stuck. A quilt this large and heavy needs more quilting simply to keep it together during use. I wanted some straight lines but not the same grid used on Trip Around the Block.  Life intervened: several family events, trips, and colds were a perfect excuse to set it aside for a while.

When I restarted last week, I decided to put straight lines on the blades. I marked endpoints on each blade and drew lines with a washable blue pen or white chalk, whichever showed up better. I only mark four blocks at a time and always start with the chalked marks since they seem to disappear quickly. By starting where the blades of two propeller blocks meet, I can work my way around all four without stopping. This saves times in starts and stops as well as having fewer threads to bury. I used grey Aurifil 50/2 cotton thread in the top and bobbin for the FMQ.

Because the ditch work subdivided the quilt into 18" sections, I started on an outside row. It's easier to work out problems there rather than in the center of such a large quilt.

Do you know how much I hate marking? What a chore; then it's still hard to see. But... the straight lines provide such a contrast. I usually use my walking foot to make straight lines; however, it was not possible to turn the quilt so frequently (and bunch so much under the quilt arm.) So I've been thinking about ruler work.


Amy's Free Motion Quilting blog has a wonderful section on ruler work with a stationary machine. Her posts share loads of information about how to work with the rulers, which feet to buy or how to adjust your feet so they don't slide under the ruler. My question is how well this will work with my older machine (Bernina 1230.)  The throat plate is less than seven inches. Something to ponder.

After all the blades are quilted with straight lines I'll add curved free-motion quilting behind them, finish quilting the sashing, and do something in the border. Not sure what; time will tell.

How I Finally Sewed the Curves: A Third Method

Here's a closeup of some of the curves in my curve pieced quilt. Everything looked straightforward but there were a few issues.

Whenever I took pairs of curves off the wall to sew them together, the darn things grew! They never fit back in the right place. There was always a gap to the left, the right or between the sewn section and what remained on the wall! Finally I pinned all the curves to each other.

But when I removed the top from the wall, showers of pins scattered across the floor. I must have picked up a thousand pins.

So I put it back on the wall. See how the curved edges are slightly uneven in the photo above? As I turned the seam allowance under, almost every short wedge left a gap in the top. I hadn't overlapped the curves enough and the uneven raw edges hid that fact. Trim both inside and outside curves evenly first!

With a clean raw edge, turning was much more successful. I pinned parallel and as close to the curve as possible before steam pressing the top.

Next, I grabbed part of the seam allowances on the wrong side of the top between my thumbnail and index finger. Then I removed the pin on top with my other hand and repinned it along the pressed seam line. I repeated this process until the seam was pinned along the fold line on the inside of the quilt top. See the photo below.

I sewed along the fold line, removing pins as the needle reached them. It's easier to remove the pins if they point towards the needle.

I pressed the seam again when the stitching was done and then trimmed the seam allowances to a quarter inch. 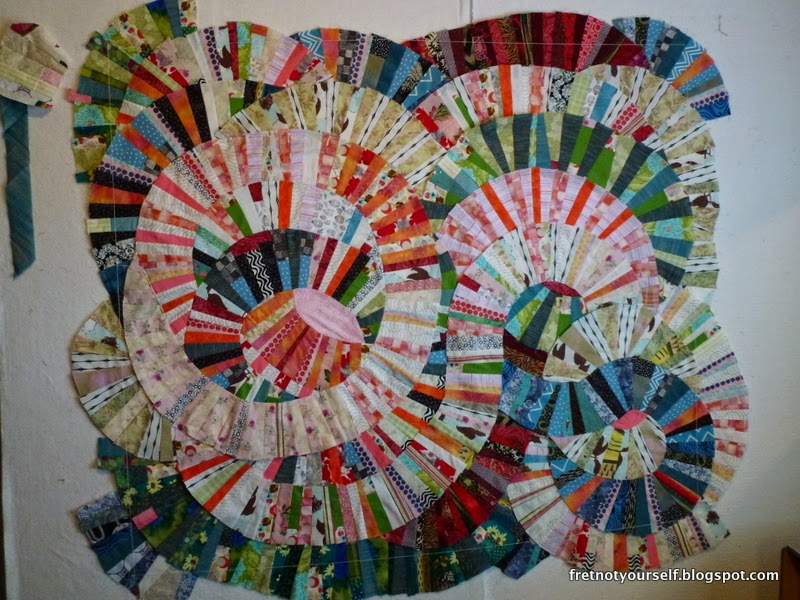 It's neither Sherri Lynn's nor Vikki's method but it worked for me.