On vacation with sporadic internet service. That’s ok because the scenery is gorgeous, the activities are exciting, and family is close.

One day I tried to quilt but the needle kept skipping so I sewed a shirtwaist dress instead. Hey, it was on my list of projects from the New Year.  A friend helped me adjust the pattern; I brought it in case there was time to work on it. Not perfect but it fits well and the issues are worked out. Hopefully I'll sew another soon.

We flew over the Great Sand Dunes National Park because our flight detoured around a storm along the Front Range. Wind caused these dunes pile to up against the mountains. Funny how small this park looks from the air. It seems immensely tall and hot each time I visit in person.
.

I gave a very short talk and workshop to the San Luis Valley Quilt Guild then a longer workshop at Kathy’s Fabric Trunk in Del Norte which went very well. Class fees went to Colorado wildfire relief and a summer camp program. It felt good to raise money for these causes.

QS took us on a boat trip down the Gunnison River above the Morrow Point Dam and what a treat that was! The weather was perfect, the scenery striking, and the NPS guides informative. We saw Curecanti’s Needle, a 700' granite spire formed by two intersecting faults that was the symbol of the Denver and Rio Grande Western narrow gauge railroad running through the canyon until the 1940s.


The other highlight of the trip was a pair of bald eagles hanging out in a dead tree. Wow!

This quilt was basted two years ago. At that time the sashing was SID but I never could decide how to quilt it. Finally I hung it neatly alongside some tops where it remained until this week. Enough! Propellers turn so they make spiraling air currents and that's a good enough design.

The more I fret about quilting, the more I try to "match" it to the fabric prints. So I considered tracing those large circles, small daisies, and wavy lines. Too constrained. Too many thread changes. The spiral looks cleaner and more effective.


The only problem was the center of the spiral. It's very hard to turn the quilt smoothly in such a tiny radius. I have used FMQ in the center and switched to the walking foot when the circle was larger but it's hard to enough keep the spacing the same with one foot. It's almost impossible with two different feet. Marking a spiral wasn't a good option this time because my marking pens blended into the print.


I resewed it by simply following the printed design of the center. The spiraling starts at the edge of the center circle. The lines still have some irregularities but those are much less obvious.


Then I pulled fabric for the binding. Lots and lots of fabrics. Red, blue, light blue, grey, white, striped. You name it; I tried it. Most were too harsh. The pale grey striped border called for a light- colored binding. Here are three of my final ideas. The black at the bottom made a very severe line as did all those strong blues and reds. I liked the grey and yellow but preferred the soft blue with orange-red flowers... even though it looks like a 30's reproduction print. It ties to the center better.


The back is a soft twill-like weave in baby pink that was a bit wider than normal so it didn't need piecing. I wish I knew the name of the weave. It drapes beautifully; not a bit stiff like my idea of twill.


One more detail photo. Without realizing it,  Propeller baby quilt is a small exercise in scale change, too. Woo-hoo; invitation met - even if it is a bit late.

I'm uncertain whether I like this top or not. These are all the red triangles. After testing several other red fabrics I thought a cream solid looked best to fill in the missing sections. Now I'm not so sure.

Perhaps the cream should have been an inner round? Or perhaps it should be dark? Would applique help? Does it need a narrow cream border? I will ponder this for a while.

Meanwhile, DH and I saw the Van Gogh exhibit at the Houston Museum of Art. It was the last week and I was determined to make it. And I’m glad I did. So much in exhibitions has changed for the better. The layout made the show as much a biography, travelogue, and art history lesson as a simple art exhibit.

The curators enlarged several of van Gogh’s sketches and placed them, along with large aerial maps in each room to highlight the different areas Vincent traveled while painting. BTW, did you know he only painted during the last decade of his life and still left over 900 works?


The exhibit brought together complimentary sketches and paintings like this pair of Montmartre.

It highlighted his friendship with Paul Gaugin who visited Vincent in Arles where they set frequently set their easels side by side as each painted the same scene or model. For example, Portrait of a Man (Joseph-Michel Ginoux?) by van Gogh is believed to be the proprietor of the Cafe de la Gare in Place Lamartine, Arles. A photocopy of Gaugin's painting with the same name was included on the information card. Although at a different angle, it is the same man in the same clothes with the same lime background.

Van Gogh considered wheat a symbol of life. He used it repeatedly as the focus and background of his portraits of peasants such as this pair. 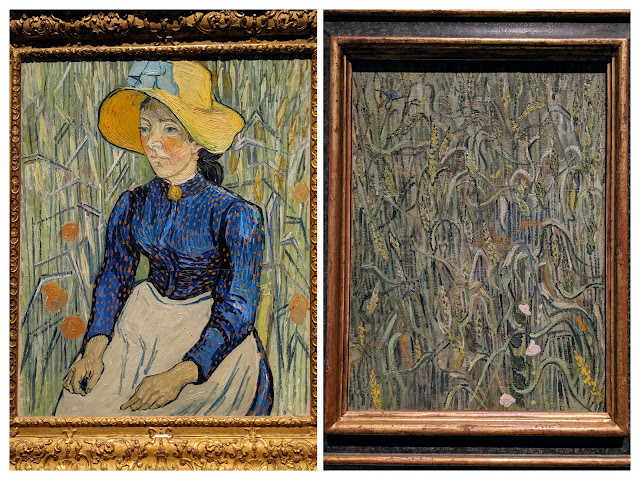 As you all know, van Gogh was repeatedly entered an asylum near the end of his life but continued to paint there. I think The Garden of the Asylum at Saint-Remy is my favorite in the exhibit for the movement of the leaves and his masterful use of black outlining.

Sewing continues although I see little progress. {Sigh.} However, I do like the way the triangles twinkle. It's the mix of mediums and darks that causes it. It just takes a bit of careful placement so the lightest of the darks is still darker than the surrounding lights. Make sense?

Here's an example of a light green surrounded by several cream triangles.


The same green fabric appears again next to one of the red diamonds but this time it's next to a darker light... much closer in value to the green than the creams above. This green won't twinkle as much because the neighboring value is so close. At least, that’s what I think.

The San Jose Museum of Quilts and Textiles is currently exhibiting H2OH, a SAQA member show juried by Linda Gass who gave a lecture one evening about how she approaches her art. Linda made a second career as an artist focusing on water resources. Her beautiful work combines silk fabrics, hand dyeing and machine quilting as she interprets maps of various areas of concern.


This three-dimensional sculpture intrigued me most - Memory of Water by Susan Else. It looks like wood but it's all fabric. Growing up in Sacramento, Susan remembers that water was free and wasted. Great fun for a child but a sorrowful memory of an adult.

On another note, I saw this picture at a San Francisco hotel. It glittered in the light so at first I thought it was a diamond painting like Julie's been making recently.


A closer look revealed it's made of screws, attached at different heights and painted single and double colors.

About the time the first Ocean Waves quilt was laid out, I had an epiphany. Just combine both triangles in one quilt. The concentric triangles are in the center with a round of perpendicular ones circling the outside.


And it has a name. The Tethys Sea existed during the Mesozoic Era but modern remnants include the Mediterranean, Black, Caspian, and Aral Seas. Since many of these scraps are both ancient and reproduction, Tethys Waves sounds like the perfect name.  At least it amuses me.

But there's a problem I constantly forget... Once all the design decisions are made, there is nothing left but to sew the units together. Tethys Waves is many, many tiny QSTs.


When the first units were sewed and laid out it looked so neat. "Almost done!" I thought. But no. I match more points and pin. Sewing sections together dislocates them from the next section. I have to put them back on the wall to ensure I'm sewing them correctly. And I added some cream triangles on the border so all the red triangles are used... which just makes more sewing. And I unsew the intersections at the back to allow them to spin. And I press carefully without steam because of the bias edges.