It's time for another utility and improvisational quilt linkup. What have you been doing?

I've been away so long my sewing space looks very cluttered and crowded. I've been trying to clear out the partially finished pieces. Also, my fabric appears to have had babies while I've been gone. Time to sort through it.

DH's grandmother made this quilt in Wood County, Texas. I slept under it the last time we were there. Rod Kiracofe's collection includes at least one quilt from Wood County. There are a couple of places that need mending. I'm planning to bring a bit of old fabric to applique over the fraying sections and preserve the fabric underneath.

The hexagonal lozenges may have been pieced on newsprint although the entire quilt is hand pieced and quilted. The orange solids are set in with Y-seams. It's also unusual for the yellow and orange borders. She finished it with Baptist fans.

InLinkz removed because it was hacked.
Posted by Ann at September 27, 2016 22 comments:

Quilting the Spiderweb and Catalina Island

I tried some different quilting on these spiderwebs. I used the walking foot to travel from point to point around each seam creating petal shapes.

When I got back to the starting point, I marked a point 1.25 inches from the center for the next round. I used pins to locate those points since markers didn't show on all the different fabrics. {The distance was a random length that looked good to me on these spiderwebs.

For the third round, I used the same distance and marked it from the outer rim of the spiderweb.

Using the same distance meant I didn't have to change the ruler and risk messing up the second and third rows.

By planning where to start I was able to sew all these rounds from web to web without breaks. Hooray! Only two pairs of threads to bury.

We recently spent a weekend on Catalina Island. I've always wanted to see the flying fish so DH arranged an evening boat ride. That was the highlight. But Catalina has so much more, especially if you like beach life. The water is beautifully clear and there are two marked areas to swim and snorkel. Loads of sea life on view.
Zane Grey, a Western writer, had a home here which is now being converted to a hotel. The Casino {which they carefully explain means 'gathering place' not 'gambling'} is visible in the lower left photo above. The entrance has wonderful aquatic murals.

The Nature Conservancy encompasses most of the island and includes the Airport in the Sky, a landing field for prop planes.
The Channel Islands have a five-pound native fox. Two of them posed for photos: one at the airport {no, I didn't feed him} and the other resting along the roadside {at the narrowest point, of course.}
Additionally, the Conservancy supports a small herd of bison brought to the island for a film in the 1920's.

The critical issue on all the Channel Islands is the lack of water. The drought that encompasses most of California is particularly acute here. All restaurants are required to sell bottled water {imported from the mainland} rather than serve water in a glass. As of September, they must use disposable dishes. The toilets everywhere use salt water to flush. Very smart. But the faucets and shower heads in our hotel seemed to have no restrictors.

Only a few cars are allowed on the island; it takes about 14 years to get a permit. Most people get around via bus, bicycle, walking or one of the 1100 golf carts. The air was so clear that walking was a pleasure.

The ferry sailed past Point Fermin lighthouse on our way to the island but DH arranged a helicopter ride back as a special treat. What a great birthday.

AHIQ linkup is next Tuesday, Sept 27.

I cut kite shapes a couple of years ago for a spiderweb quilt. "More is more" {my usual method}  didn't work in this case so the warm colors were pulled and stashed away for a while.

Digging them out recently there are sixteen stars; perfect for the toddler quilt I need. Actually I needed it this summer but only have time to start it now.

Several layout tests until I decided to arrange the stars diagonally.

The outmost string on the spiderweb wedges must contrast with the star colors. Some were red, orange or yellow. I moved them to a star with a different value. And lucky me, there were some blue wedges from the previous quilt that didn't look good against blue stars. {I still need to border and quilt that one.}

It's always amazing how much smaller the quilt becomes as the units are sewed.

We are traveling again, more family time. One unexpected advantage is the opportunity to see some older family quilts as well as some from my distant past. :-)

While my son was in college I finally finished his high school t- shirt quilt. There were two reasons it took so long.
During a cleaning fit I found the perfect back. When my kiddos were young they glued appliqué tops while I was at a meeting. Of course they used what they liked best {my favorites} and cut everything from the middle of each piece. They were so proud of their artwork who could be upset?

I learned a valuable lesson: DON'T SAVE THE GOOD STUFF. Really. Our work looks better with the best.

Here's the back. Always my favorite. He added inked details on the basketball and skateboard wheels. He did a great job freehand cutting his name. How did he keep the letters so consistently sized as he changed fabric for each letter?

Now for a bit of geology. This view might look like snow, but it's diorite (a type of igneous rock.) The smooth surfaces and sharp peaks show where glaciers moved through Yosemite.  There's almost no soil here but trees find a way to grow in every crack.

Tuolumne Meadow is filled with soil where retreating glaciers dropped their loads.

I found this photo of Mono Lake from my last overflight. It's almost circular. The old shorelines show how the water's dropped since the 1960s.

A Finish & Kaleidoscope of Butterflies Link Up 09/2016


Masses of butterflies are called kaleidoscopes. Cathy and I recognized in this word a wonderful conjunction of quilting and butterfly habitat preservation. Many species live in limited areas while others, like monarch butterflies, feed on limited diets. Monarch larvae feed solely on milkweed. Eradication of this weed/native plant severely impacts their reproduction which is seen in the decline of their population. On this linkup we share kaleidoscope and butter quilts and fabrics, information of butterfly releases as well as habitat restoration projects. What have you seen lately?

I just bound my latest kaleidoscope. After sharing at my guild meeting, it's off to a new home.

Searching past posts, June was the last time I wrote about the quilt. In fact, I quit working on any quilting in May. But with the quilting started, it called to finally be finished.

Here's where the quilting left off. I was organically stitching {semi}straight lines with the walking foot. Every third or fourth, I deliberately made a curvy line. It's actually easy to straight line quilt on this design. Just aim for the next point of the grid and the lines will be straight{ish}.

My first {and second and third} ideas were to emphasize the template pieces. Why didn't I do that? The printed fabrics are already full of design, I didn't want to over-quilt it, and gifts for young men should hold up to heavy use.

I feared the quilting design would overpower or detract from the quilt pattern but that didn't happen. Perhaps because I used peach thread. Lately I've been finding that quilting with a medium-color thread (halfway between the lightest and darkest fabrics) works well for scrap quilts.

The back started with three fabrics: two one-yard cuts and and a quarter yard. After sewing them I cut them lengthwise about a third of the way across. Then I sewed strips of the leftover pieces from the front to widen the back sufficiently.

Previous posts:
Recent butterfly quilts on the web:
I found this collection of butterflies while touring Yosemite last month.

And this daring beauty flitted ahead of me last week. 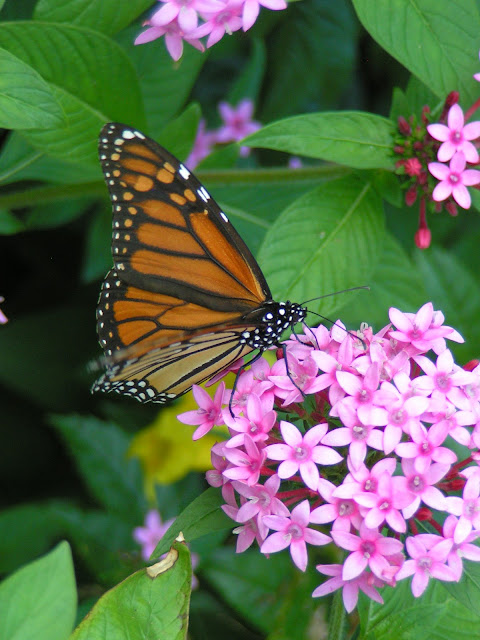 InLinkz removed because it was hacked.
Posted by Ann at September 01, 2016 29 comments: