May the Fourth be with You

May 4 is coming this week. Star Wars Day because - May the Force be with You. We finally found the Yoda fountain in San Francisco. If you're a Star Wars fan, it's an iconic landmark.


We joined some friends at the Presidio to view the Walt Disney Family Museum and walk the grounds. The Presidio was formerly a Spanish and Mexican fort, then a US military base but now part of the Golden Gate National Recreation Area. Congress mandated the Presidio Trust manage the park in a financially self-sufficient manner - no federal funds. Lucasfilm {along with other companies} rent some of the buildings and restored others but all property is owned/managed by the Trust.

Leaving the Museum, we stepped onto the main parade ground. There's San Francisco Bay and Alcatraz in the distance. What a view. Many of the officers quarters have become rental condos and duplexes. Some of them enjoy this scene daily from their windows. Wouldn't it be fun to live here?


With my usual photographic abilities I managed to perfectly line up the window bar at the Visitor Center with the Golden Gate bridge roadbed. Not the best photo of the bridge but doesn't the window view look artificial? It must be the change from dim interior to bright exterior.

In the foreground you can see they are in the process of building Tunnels Top park over Doyle Drive. Dallas built one over the Woodall Rodgers freeway that is lovely and well-used.

Between the day trip and other responsibilities, I didn't get much quilting done. I've also noticed a lack of creativity. I don't have the energy to work on something new. But... there are several old UFOs that could use some attention.

Currently I'm sewing sawtooth sashing for the {very old} New York Beauty blocks. One smart move is staggered starts - four each time - so something's always close to done. It also helps keep the scraps more random as older and newer ones mingle on each sash. Here's a representative sample.

Seventy-two are needed but a few extras will give me some design flexibility. Sixty-four were finished when I snapped the photo and the rest were done yesterday. What a relief. I've been {not} working on this quilt for years. Although I can't remember the exact year it was before the Millennium. Sigh.

The next step is the posts. I have some ideas to draft and play with.

Several Improvs in One

It's been a while but I finally pieced the border of the Square Deal. After swearing I wasn't going to make more blocks... I did. The top needed a few more strong reds and light blues.


What's different? Compare the upper right corner of the final version above with the previous {partially sewn} version below. Five blocks were changed out on the top and right. They were lovely blocks but "pushed the envelope" a bit too far in value. The borders were getting muddled. That's always an issue with printed fabrics where several colors coexist. It can add movement or simply cause designs to become lost. Now there are still diffuse areas but also more definition.

EDIT: I reshot and replaced the photo above. The colors were too acid. I still think the photo below has truer colors though.

Do you notice my crosses became much wider with each set of Xs? The last set is pretty wide indeed. The first ones were so narrow that the seams overlapped after pressing. Guess I loosened up as time went on.

Evaluating this quilt it meets criteria for:
However, this is not exactly what I envisioned as a Red quilt. Here red becomes the foreground while I wanted to use it as a background - more like Cathy's Confetti quilt. So another quilt idea goes on the {increasingly} long "to-be-made" list but it still feels good to combine several challenges into one quilt especially since life intervened several times keeping me from fully participating.

At some point I need to make a back and baste this top. That's a task for another time.

More quilt housekeeping. My guild show is next month. I thought I had nothing to enter; I certainly don't have the energy to finish something now. But since our show is biennial, I checked my 2018 and 2017 Finish pages to see what might be available.

Oh, joy! Spiderweb wasn't in the last show. It was finished a month or two later.


And bunches of Coin quilts. Many of these have been gifted but Fifth Chinese Coins is on our bed.


This week I've been cutting and sewing sleeves. As soon as the show ends, I'll take the sleeves off again and put them in a ziplock in my scrap bag so hopefully I can find them next time I need a sleeve. {Bane of my life.}


I'm still chugging along sewing the centers of Shadow Star blocks. Kaja sent me a scrap of beautiful shot cotton that I used for one Star. It's a bit thin; shot cotton always is; so I doubled the fabric. That's an old trick to make a quilt last longer.


Some of the blocks lend themselves to a different fabric for the center while others need a repeat instead.


Fun playtimes deciding what fabric to use. I realize now this quilt will take a longer time to get together and I'm going to enjoy every minute.

It may not seem like much to you but I sewed these three centers of the Shadow Stars in one afternoon. For the past month I've only been sewing one a week. Guess I'm getting stronger. 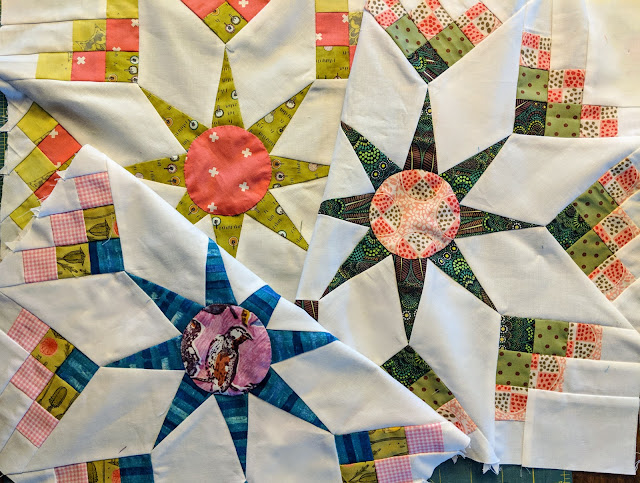 I'm still thinking about the sashing and posts but decided it would be easier with centers. And here we are.

Happy birthday to the young recipient.

Here it is, quilted, bound, and washed. No quilting design seemed a good fit to me. Either they distracted from the colors or they seemed too prominent on the solids. Finally I simply stitched in the ditch along each seam line.

The back really shows the crinkling effect of the quilting design and batting choice. Stitch-in-the-Ditch emphasized a gathering effect not seen on my other quilts. I think the combination of two threads (nylon monofilament and cotton) in the ditch and solids caused this. Other fabrics may behave the same but light hits every hint of a fold on solids.


Here's a detail of the quilting. I've said it before but I personally love the way the batting crinkles the quilt after washing. Hopefully you love your choice as well.

I was a bit hesitant when starting this quilt last year but it's become one of my favorites. I intended to make a video of this process but that has not happened. Given the current situation, it will not. It's still pretty. And fun. And easy.