Queueing up the Quilting

Three new tops are ready to sandwich once the backs are sewed. I've found it easiest to lay the top on the floor and cover it with fabrics until the back is large enough. Sometime I'll make a back like Julie's. What a great way to dress up the back side of a quilt. But not this time. After I sew them up, I'll spend the day pinning all of these plus the Chinese Coins with Roses top. All four will take one queen-size batt and I won't have to worry about storing a partial batt.


I'm keeping the Roses because I've been asked to show my guild how to make them but the baby quilts are all promised. I'd still like to have some finished ones on hand. I'll have to look through the bin again. Surely there are more partial blocks hanging around.

In the meantime, it's been flooding in Houston and Dallas. Fortunately my traveling has been on the dry days because you definitely want to stay inside in these downpours. Then we went to Oregon for a graduation. Precipitation accompanied that trip.

My brilliant idea was to go to Crater Lake on the way up. We've always wanted to see it; the Lodge just opened for the season. We drove past Klamath Lake, the largest fresh-water body in Oregon. It's the geologic remnant of pluvial Lake Modoc which was ten times larger and formed about 10,000 years ago during the last Ice Age. {Pluvial lakes form when temperature rises near glacial regions.}


Bits of snow hid in the shade as we entered the park but it was waist high by the time we got to the Lodge which sits at the rim of Crater Lake.

And then it started to snow.

We were told this is a wonderful view of the Lake... if hadn't been snowing. We are {allegedly} right on the edge of the lake. Not that we could see anything. Neither the near nor far side.

Still, we enjoyed touring the Lodge and reading about it's reconstruction. And we hope to return on a more auspicious day.

The sun broke out as we crossed the border so DH took a photo of Mt. Shasta. Another future trip.

This is not the last of the Chinese Coins from the "top that didn't work" but it's the last of the pastel solids I cut. Why, oh why do I always overcut? These baby quilts are heading to children in different cities so it's {a bit more} acceptable to have similar layouts. Ok, I'll admit it. I gave into temptation to move them out because they are cute, easy, and the right size. Less thinking required.

The inner border is navy, not black, and the border is a fun green and yellow stripe I purchased in abundance because stripes are great for borders and binding. But the quilt looks unfinished.


What can I applique on it? What about tulips? The two Coins in the center row with printed tulips gave me the idea. Plus those rows of them looked so good on the first quilt like this. Audrey's Scrappy Tulips is a stellar example of the flowers running through my mind. I almost made them but then wondered if they would clash against the Coins background. Also, the center doesn't bother me as much as the boring border.

What about rabbits instead? Sue Garman designed Bunny Block Sampler, a charming quilt with running hares around the border. Unfortunately my border is too narrow to hold rabbits.

Eventually I chose one upright rabbit that fits well in the corner. The template is here. I tried to draw my own rabbit. My folk-art ones are not too bad but they were either too small or too large; I could never get them just right. This one is more realistic and... I'm not an artist. Besides, I wasn't sure if this would work at all.

I traced it on a white print, turned the seams under and machined stitched it with an overlock design. Not too bad for a first attempt. Success built my confidence. I believe I can hand draw my own designs in future. Several ideas are running through my mind. {Breeding like rabbits.} Hooray. Practice with a known design is building my creativity.

As I wrote recently, I haven't felt very creative lately; I still don't. Sewing is relaxing but making all the decisions for a new quilt overwhelms me. Working on leftovers, extras, and older projects fits my abilities for now. Plus, they are {finally} moving along. {Go, team, go. On the floor and out the door.}

Case in point: If you recall Chinese Coins XII, made for my co-grandmother, started with columns from a Coin that didn't work. Adding sashing makes a few Coins go a long way so there are still loads of these columns left. As you would expect, I cut several extra WOF solids strips, too. How easy to sew them into another baby quilt.

At the end of last year I had five baby quilts; now they are all gifted. Nothing in the queue and DH's co-workers are still having babies!

This time I pulled the yellows and ochers. The yellow and white stripe sets them off well, especially after  the strong inner border was added. It looks as if these fabric purchases were planned but that is not the case. Buying fabric at one time for a quilt usually is a recipe for disaster for me.
As Audrey wrote recently, it's much better to pull from different years and brands. Making things work that aren't dyed to match gives me so much pleasure. After all, when all the decisions are made, there's nothing else to do but sew them up. That may be why we have so many UFOs. All the creative parts are done and we're left with the chores of sewing, pressing, and trimming.


However, compared to Chinese Coins XII, this top seems unfinished. It lacks the snappiness the rows of tulips gave the previous quilt. What to do?

The spirals in the border gave me the idea to add spirals in the center. They are black so it was my original choice but when the fabric was laid on the quilt, anyone can see it's too severe. Back to the stash where I pulled this marsala shade of shot cotton. Much improved.


With only a ten-inch WOF, I cut it on the diagonal and made two bias strips to put through bias tape makers of 9- and 12-mm. Pinned on the top, they are much too small and insignificant. 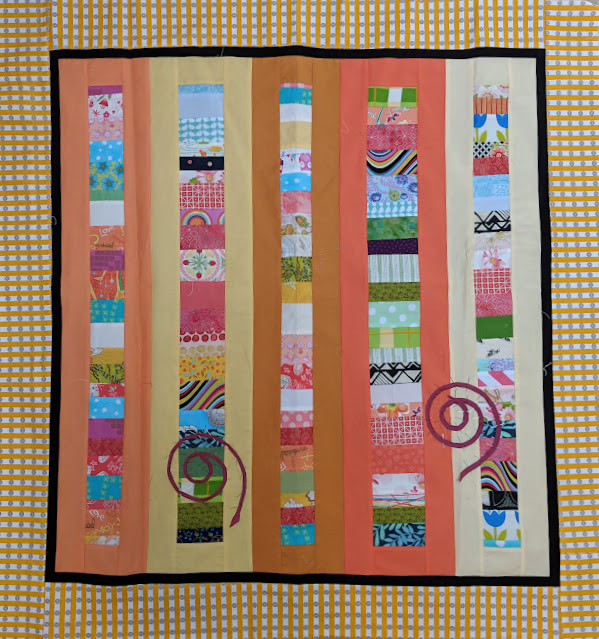 It either needs a larger spiral or many more small spirals. I've never had much luck sewing strips together and putting them through the bias tape maker. They always pooch out where the seams join. Shot cotton is very thin so I decided to try it again but didn't have confidence it would work. Wrong-o. No trouble at all.

One larger spiral of 12-mm bias tape pinned on the quilt scales better. 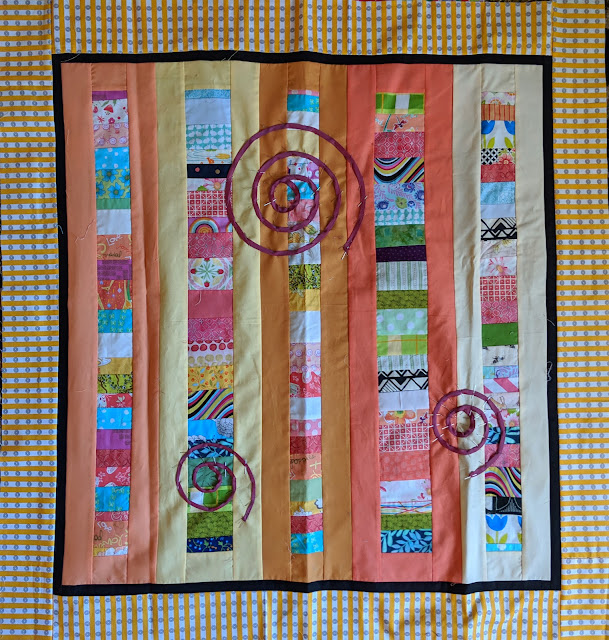 "This is just a baby quilt," I kept repeating but the tiny spirals looked too ... tiny. Eventually I replaced the narrowest one with new, large 12-mm spiral. Then I left it on the wall for a couple of days.

I like the mixed spiral sizes {and I liked not having to replace the third} so I sewed each side of the spirals down. The inner end is tucked under the spiral; that wasn't difficult. The outer end had to be turned; that took a while. Obviously I need more practice.


The thread ends need to be pulled to the back and tied. And look. Those aren't spirals in the border; they're concentric circles. Someone needs new glasses.

I didn't intend to reprise The Square Deal so closely but, while clearing up, four sets of HSTs already sewed into nine-patches surfaced. They surprised me so I dug around extensively but didn't find any more. These are the last of this combination and I need several baby quilts. Soonest! So here we are, choosing between two very similar white prints for the center cross: frogs in a pond or sea creatures. 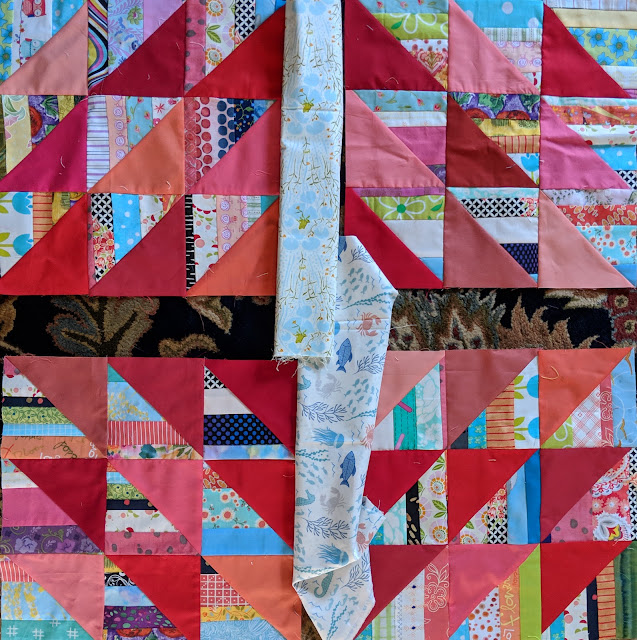 At the last minute I added the squares to make a Churn Dash center again. It makes the center more interesting; however, the inner border is blue {instead of white.} A small change.

Final decision: which print for the outer border? My first thought was the lovely one at the bottom but after looking at the photo, the triangle print floats my boat. Why does it look better? When it was in the box, the colors looked quite different than the center blocks. Viewed through the reducing lens of a camera, it changed appearance somehow. It has a richness the other lacks. 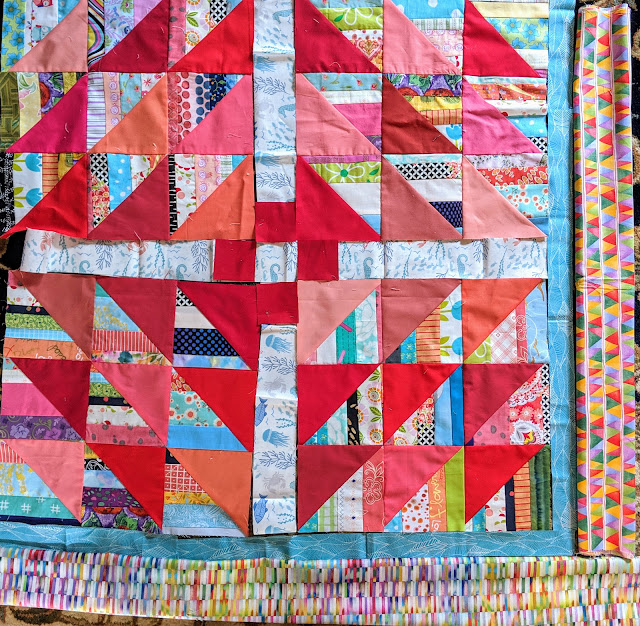 After looking at this photo for a few days, I've decided the scale of the right border relates to the center better than the bottom border. They are nearly the same colors but the slightly larger design on the right gives them more presence. What do you think?